Meet the new Mayor of Stockton-on-Tees

Councillor Kevin Faulks is the new Mayor of Stockton-on-Tees. 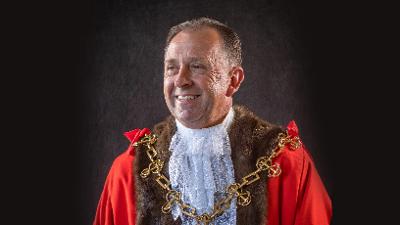 He was officially installed at the Council's Annual General Meeting today (Wednesday, 26 May), replacing Councillor Mohammed Javed at the end of his mayoral year.

Born in Middlesbrough in 1961, Councillor Faulks has lived in Ingleby Barwick for over 20 years and worked at Redcar blast furnace from 1977 until its closure in 2015.

He has two children - James, an engineer by trade who currently works at Stockton Bearings and Sara, a support worker at a children's care home. This year the Mayoress will be his wife Pat, who has worked for the NHS for 38 years.

Councillor Faulks said: "I'm proud to become Mayor. There's so much happening in communities across Stockton-on-Tees and I'll be putting all my efforts into promoting the whole Borough.

"I'm passionate about the environment and I'd really like to work with local litter-pick groups as well as visiting schools and organisations during my mayoral year.

"I also do a lot of volunteering with local charities with my family and I'm looking forward to continue helping as many people as I can by fundraising for some great causes."

The Mayor's charities this year are health and wellbeing charity Little Sprouts, and Remembering Rebecca, which supports children and families affected by neurological conditions.

He also hopes to raise money for the Mayor's Benevolent Fund as well as continuing the Mayor's 100 Heroes challenge.

The retiring Mayor, Councillor Mohammed Javed, raised £9,400 for the Great North Air Ambulance Service, The Halo Project and Macmillan Cancer Support with the money split evenly between the charities.