It's the day we've all been waiting for!: historic Globe is restored and ready to bring the stars back to Stockton

It's played host to the likes of The Beatles, Tina Turner, and Morecambe and Wise, and now the famous Globe is ready to bring the stars back to Stockton. 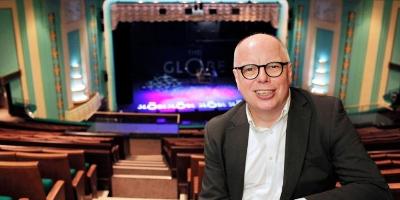 The iconic Grade II-listed Art Deco Globe, which has stood empty since 1997, was unveiled today following its restoration by Stockton-on-Tees Borough Council.

Situated in the heart of Stockton High Street, the Globe's 3,000 capacity makes it the biggest live entertainment venue between Newcastle and Leeds.

And it has been handed over to the world-renowned Ambassador Theatre Group (ATG), which runs major venues worldwide from London West End to Broadway.

Councillor Nigel Cooke, the Council's Cabinet Member for Regeneration and Housing, said: "It's the day we've all been waiting for - the Globe is back and it's looking absolutely stunning!

"It's played host to the biggest names in showbusiness and when you're in there you can almost feel the history. It most definitely holds a special place in people's hearts and memories.

"But today is about looking forward to exciting times ahead and creating a whole load of new memories for generations to come. And it won't be long before we're welcoming the stars back to Stockton.

"ATG have put together a superb line-up of acts with incredibly broad appeal. Paloma Faith was the first act they announced and she sold out within eight hours, which tells you a lot about the level of public appetite that's out there.

"Since then we've seen an array of further acts and shows announced. Among them are Tim Minchin, Diversity, Jools Holland, UB40, We Will Rock You and of course Status Quo, who some will remember as the last band to rock the Globe in 1974!"

He added: "Make no mistake, this is an absolute game-changer for the area and it puts Stockton back on the map as a live entertainment destination.

"Stockton Globe will pull in visitors from far and wide and generate millions of pounds of additional spending in the local economy. It will also put an end to local people having to travel elsewhere to see big shows.

"While so much has changed in the last year or so with the pandemic, this is actually a continuation of the direction we were already headed in, which is one of changing our town centres in the face of rapidly shrinking demand for retail space.

"The pandemic has simply accelerated that need for change, and the need for town centres to have a great leisure offer to pull people in. An attraction like the Globe will certainly help us do that."

The Globe will welcome its first show in September, while 'The Link', which adjoins the Globe, will open in July as a 200-capacity venue in its own right.

Stockton Globe General Manager, Jo Ager, said: "We are so excited to announce that the day we have all been waiting for is finally upon us; the restoration of Stockton Globe is complete and it is absolutely incredible! We simply cannot wait to throw the doors open, welcome people in and show this phenomenal venue off.

"Tour promoters have taken the cautious approach to delay programming until later in the year to ensure a safe environment for all who attend. The first acts will take to the Globe stage in September 2021, but fans will be able to see the newly renovated building in all its glory and get their live entertainment fix at the adjoining venue, 'The Link', well before then.

"The Link will open its doors in mid-July, operating as a café, bar and live entertainment venue with an exciting programme of local and emerging artists to be announced shortly.

Also announced today was a Council-sponsored monthly prize draw - the Globe Free Tickets Draw is exclusively for residents of the Borough and will see 500 tickets put up for grabs over the next year.

The restoration of the Globe, which was built in 1935, was funded by Stockton-on-Tees Borough Council and a £4.5million grant from The National Lottery Heritage Fund's Heritage Enterprise scheme, as well as a £774,000 grant from the Capital Kickstart Fund, part of the Government's £1.57billion Culture Recovery Fund.

David Renwick, Director, England, North at The National Lottery Heritage Fund, said: "Our Heritage Enterprise scheme is about using money raised through the National Lottery to unlock the potential of buildings like the Globe and that's exactly what's happened here.

"The restoration of the Globe has saved this much-loved and famous part of the region's heritage from further decline and rather than it standing empty and neglected, you now have this major live entertainment venue with huge potential to spark wider regeneration, economic growth and job creation.

"That potential can now be realised. Big shows will bring big audiences into Stockton and now that the Globe has been brought back to life, we look forward to seeing it thrive and being enjoyed by people from near and far for many years to come."