A change to the road network in Port Clarence to reduce the volume of commercial vehicles travelling on A1046 Port Clarence Road will come into effect from Monday 27 September. 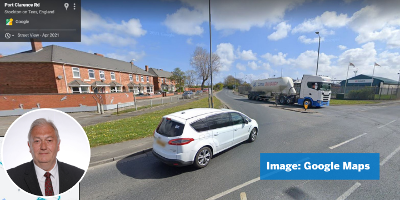 Due to the number of heavy goods vehicles (HGV) currently using the residential stretch of the A1046 Port Clarence Road to reach neighbouring business sites, the existing 7.5tonnes environmental weight restriction currently in place is to be amended.

The new weight restriction will be reduced to cover A1046 Port Clarence Road, between its junctions with Hope Street and A178 Seal Sands Road only, meaning HGVs, other than those requiring legitimate access, will be required to use alternative routes.

The move comes after concerns were raised by residents and other stakeholders in the community about safety for those living close to the A1046 and the road's proximity to High Clarence Primary School.

Councillor Mike Smith, Stockton-on-Tees Borough Council's Cabinet Member for Environment and Transport, said: "The idea is that the 7.5tonnes weight limit be reduced to cover A1046 Port Clarence Road, between Hope Street and the A178 only, in order to better protect residents and re-route HGVs along better suited roads.

"Safety and environmental concerns have been brought to us by a number of residents. As ever, we're listening to the feedback and taking action to make things better.

"We've got the support of Cleveland Police on this, who are responsible for enforcing the weight restriction, and the local community are happy about this change with no objections received during the consultation period.

"We're also looking into the possibility of using some funding in future to introduce traffic islands along the residential part of the A1046 to reduce the number of speeding vehicles."

The costs associated with the proposed change will be funded from the 2021/22 Local Transport Plan budget.

For more information on our maintenance of the Borough's road network, visit Roads and pavements.