All aboard for the Stockton & Darlington Railway 197th Anniversary Specialist Market! 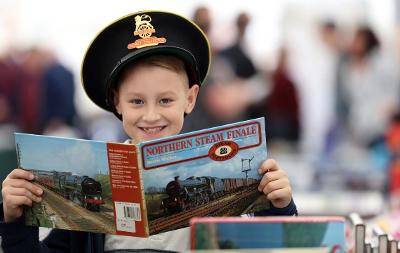 Step back in time this weekend as we celebrate the 197th Anniversary of the Stockton and Darlington Railway.

There'll be fun for all the family as we tell the story of the events of 1825, inspired by the beginnings of the public railways.

Saturday's free market (24 September) is part of the countdown to the 2025 bicentenary, which will celebrate 200 years since the first journey was made on the famous Stockton and Darlington Railway.

Open from 9.30am to 3pm in the events marquee on Stockton High Street, the market will host a range of enthusiasts, exhibitors and traders selling and showing railway related displays, gifts and memorabilia.

Councillor Steve Nelson, the Council's Cabinet Member for Health, Leisure and Culture, said: "In September 1825 this Borough witnessed the birth of the modern railway- it was a momentous occasion, changing history, industry and the way people travel ever since.

"Not only was it the first public passenger railway in the world, but it was pulled by one of the first steam locomotives, Locomotion No.1.

"Saturday's market celebrates the 197th anniversary of that revolutionary moment and there will be something for everyone, railway enthusiasts and all the family alike.

"So come along to the event and join in as we go full steam ahead towards the countdown to the 2025 bicentenary."

Traders and exhibitors that will be there on the day include:

The market is being organised by Stockton-on-Tees Borough Council in partnership with the Friends of Stockton & Darlington Railway.