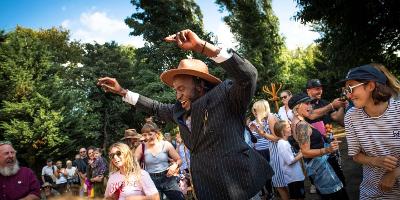 Festival of Thrift organisers have announced plans to relocate for its 2023 celebration of sustainable living.  After seven joyful years based in Kirkleatham, Redcar the annual national festival will continue its journey across Tees Valley to the new location of Billingham in the borough of Stockton-on-Tees.

The festival will be celebrating for the final time in Redcar in its tenth anniversary year on the Saturday 24 and Sunday 25 September 2022.

Festival of Thrift was born in Darlington back in 2012 and moved to Redcar in 2016 when the town was experiencing a period of challenge after the demise of the steelworks. Since then the festival has attracted over 180,000 visitors and created significant economic uplift to the area. Redcar is now on the brink of a major town centre development and is in a period of cultural growth across the borough.

Emma Whitenstall Festival of Thrift's Executive Director said: "Festival of Thrift is dedicated to shining a light on the Tees Valley, celebrating the area's individuality and the strength of its people and the best way to do that is to move around the area and showcase the communities from within.  Redcar is in a great place with the Town Deal and the new cultural hub and we feel the time is right to move on to another location.

"The move to Billingham is in line with Stockton-on-Tees' borough-wide events programme and a direct response to consultation carried out with residents in recent years.  The festival will also be an important part of connecting the community with the Council's ambitious Environmental Sustainability and Carbon Reduction Strategy.

"The seven years we have spent in Redcar have been utterly magical and we will be very sad to leave Kirkleatham but we are extremely confident that we are leaving Redcar in a better place than when we arrived. There is no other place that we would rather celebrate our tenth celebration and we look forward to welcoming everyone in September as we come together and share achievable and creative ways to make the shift to thrift."

Councillor Jim Beall, Stockton-on-Tees Borough Council's Cabinet Member for Health, Leisure and Culture, said: "We're delighted to be working in partnership with Festival of Thrift, and will also be making a significant financial commitment to host this well-established and nationally-renowned event in Billingham next year.

"Billingham will make an ideal venue for the Festival, which pulls in tens of thousands of visitors and provides a major boost to the local economy, while also spreading an important environmental message about sustainable living.

"This comes at a time when we're working very hard to support events across the Borough, which seen the council support the likes of Billingham International Folklore Festival of World Dance, Thornaby Show and the recent Christmas events in Norton and Yarm.

"In keeping with this, we're also pleased that the Festival of Thrift organisers are planning a series of related activities in some of our other townships in the build-up to the event."

Redcar and Cleveland Council's Cabinet Member for Climate Change and Culture, Cllr Louise Westbury, said: "The Festival of Thrift has been a fantastic addition to the events calendar in Redcar and Cleveland over the past seven years, providing residents and visitors with the opportunity to celebrate sustainability and make the shift to thrift.

"We are fully supportive of the festival and had confirmed support this year and for a further three years for the period of 2023 to 2026. However, we appreciate that the festival was always designed to be an event that moved around and whilst we are disappointed it will be leaving us after this years' event, we are pleased that it will be staying in the Tees Valley and taking up its new home for the next three years in Billingham.

"The Kirkleatham site has provided a stunning backdrop for the festival, and I am sure that the thousands of visitors to the festival have fond memories of past events and discovering how they can make small changes in their lives that will add up to a big difference for the future of our planet.

"We are really looking forward to this years' festival and celebrating the 10th anniversary of thrift in style at Kirkleatham on the 24th and 25th September."

Further details of the 2023 event, including dates and location, will be announced at a later stage.

The theme for this year's Festival of Thrift's tenth anniversary festival in Redcar on Saturday 24 and Sunday 25 September 2022 is 'Our Common Wealth' aligning with the 2022 Commonwealth Games but also exploring in more depth what our own common wealth is - what do we share? What do we have in common?  The Festival of Thrift team are busy finalising a programme featuring artists and activities from across the globe and much closer to home to entertain festivalgoers and highlight sustainability issues.

Ethical enterprises such as the local makers, food producers, artisans, upcyclers, fixers and recyclers, craftspeople and artists who trade and provide workshops and entertainment will return in force for the festival weekend in September with plenty of advice on how to live sustainably.  Festival of Thrift's Fashion Show, ECOuture, will return for the September festival weekend featuring a range of sustainable and slow fashion outfits created by some of the UK's up and coming young designers.

Festival of Thrift is funded thanks to generous support from Arts Council England, Redcar and Cleveland Borough Council and Tees Valley Mayor and Combined Authority.

A potted history of Festival of Thrift

Festival of Thrift CIC is a community interest company which celebrates sustainable living through creative cooperation; building and sustaining resilient communities, working with high quality socially engaged artists and reaching out locally and across the UK to audiences of all backgrounds.

Founded in Darlington in 2012, the festival was initially mounted at award-winning Lingfield Point, a business park with a difference, grown out of a former knitting factory and host to various businesses. The festival was co-founded by Gerardine Hemingway MBE, Wayne Hemingway MBE and John Orchard, CEO of Lingfield Point, and was managed via the company.  Stella Hall was appointed first festival Director in early 2013 and has led the team since, becoming co Director in 2021 with the appointment of Emma Whitenstall.

The first festival was a more modest affair and expected to attract 5-10,000 people. Over 25,000 folks flocked in over the weekend and it has grown ever since with 50,000 visitors attending the 2021 event.

In 2015 Festival of Thrift CIC was established when the Lingfield Point site was purchased by Clearbell plc. This coincided with an invitation to Stella Hall from Redcar and Cleveland Borough Council to mount an event in Redcar after the closure of the steelworks. She proposed the move of Festival of Thrift to Kirkleatham where it has remained.

Festival of Thrift is now a key national and Tees Valley organisation. It has run nine large-scale Festivals, including a pandemic edition in 2020 online, positioning artists as inspirers to action and change on sustainability. The festival team is now building a year-round programme and planning for the 2022 large-scale weekend event on September 24 and 25. This year's theme of 'Our Common Wealth' will explore what we have in common - what is our "wealth"? Is it shared landscapes, values, aspirations, skills?

For Council news direct to your inbox sign up to our My Council Newsletter.

Image: Patrick Ziza at the Festival of Thrift 2021