Nearly 100 arrests in eight weeks: The "major impact" new CCTV cameras are having in Stockton and Parkfield 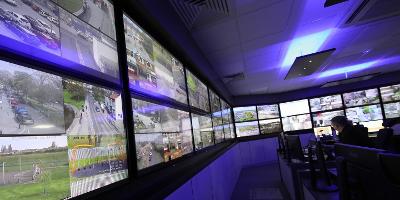 The cameras - operated from Stockton-on-Tees Borough Council's Control Room - are among nearly £370,000 worth of new crime-fighting measures  delivered in the area.

Meanwhile, 11 new streetlights have been installed and 44 existing lampposts have been equipped with more powerful lanterns to deter criminal activity.

The improvements follow last June's announcement of a successful bid to Round 2 of the Home Office's Safer Streets Fund.

The bid, which secured £366,289 and was commended by the Home Office, was put together by the Council on behalf of the Office of the Police and Crime Commissioner.

Councillor Steve Nelson, the Council's Cabinet Member for Access, Communities and Community Safety, said: "We've worked very hard, firstly to secure the funding and secondly to get these improvements in place. We're already seeing evidence that they're having a major impact.

"We've introduced 20 new cameras to the existing network, upgraded five existing ones, and bought a further five rapid deployment cameras that can be brought into hotspot areas quickly. They've only been fully operational since March 1 but the eight weeks up to April 26 they enabled our control room to respond to 498 incidents and assist with 94 police arrests.

"Although the Borough is one of the safest places in the Tees Valley, this particular area is the location of about 20 per cent of all recorded crimes in the Borough. Now that these measures are in place, we're hoping to see a fall in crime and we hope people living in these areas are starting to see and feel some benefits too."

"It's not just about cutting crime - although the impressive figures from Cleveland Police speak for themselves.

"It's also about making the community feel more protected and engaged. The fact that they have been involved in consultations about the future of their area throughout this year-long programme has been vitally important."

Inspector Jon Willoughby from Stockton Neighbourhood Policing Team added: "Thanks to the excellent partnership work in securing this CCTV and the intelligence and evidence it is providing we've been able to take positive action resulting in a significant number of arrests.

"We're committed to making Stockton-on-Tees a safer place to live and work and encourage communities to tell us about any issues they're experiencing. You can report to your neighbourhood team on 101."

The funding is also being used to offer free crime prevention advice and equipment to residents in the Stockton town centre and Parkfield areas.

For Council news direct to your inbox sign up to our My Council Newsletter.