Eyesore buildings in Thornaby and new long stay parking in Yarm are in Stockton-on-Tees Borough Council's sights as it continues to lead a town centres fightback. 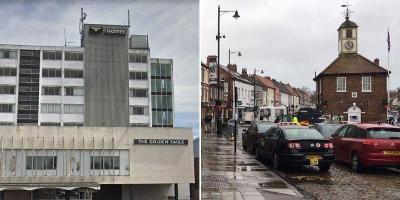 The Council approved up to £30million of borrowing to support town centres in December.

It has since completed the £7million acquisition of Wellington Square shopping centre in Stockton town centre.

And it is now pushing for breakthroughs in Thornaby and Yarm.

The Council is joining calls for the respective leaseholders of the Golden Eagle Hotel and neighbouring Phoenix House to bring forward credible plans for their reuse.

The Eagle has a pub on the ground floor but the remaining floors have been unused for years and it is generally in poor condition.

Phoenix House, on Trenchard Avenue, has been empty since npower quit the site in 2014, moving 400 staff to Rainton.

Both buildings are tangled up in long-term lease agreements with the town centre's new owner.

Councillor Bob Cook, Leader of the Council, said: "Thornaby town centre has lots of national brands and is absolutely thriving.

"But it is being brought down by these two buildings which share three things in common - they're eyesores, they're tangled up in long-term leases, and they sit on prime town centre sites with considerable potential.

"The leaseholders of both buildings need to produce plans to modernise them and bring them back into use and we'd urge the new owners of the centre, London & Cambridge Properties, to do everything in their power to compel them to act.

"We stand ready to help any party that is able to bring new developments into our town centres."

The Council remains locked in negotiations with landowners about two potential sites for long stay parking that would service Yarm High Street.

One of those sites is a strip of private land under Yarm Viaduct but requires access via Network Rail land.

That complication has thwarted previous efforts to convert the site for parking but the Council is in discussions with Network Rail to break the deadlock.

Councillor Cook said: "We've worked closely with Yarm Business Forum to make changes to parking on Yarm High Street and we've had some businesses reporting they're seeing customers they've not seen in years.

"But we really need to crack the problem of long stay parking to support the High Street.

"The site under Yarm Viaduct is ideal for this but Network Rail hold the keys to unlocking it as a viable option and it's fair to say we've been frustrated by their inflexibility over the years.

"The former Secretary of State for Transport visited at the start of the year - he said himself that he thinks this can be done and pledged to raise it with Network Rail at the highest level.

"We've since had conversations with Network Rail and are extremely keen to take this forward. We're also at an advanced stage on another site but we can't reveal any more details on that one for now due to commercial sensitivities.

"Our aim with all of this is to do anything we can to support all of our town centres to be successful, and we will work positively with anyone who can help us achieve that."