It is all go at the Globe - a large excavator has moved in to help carefully demolish the existing dressing room block. 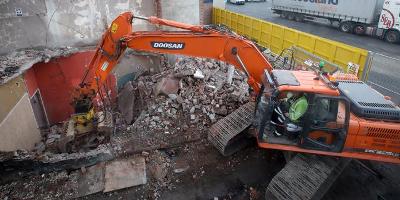 Stockton-on-Tees Borough Council's Cabinet Member for Regeneration and Housing, Councillor Nigel Cooke, said: "The Globe's dressing rooms were very small, basic and unlike the main auditorium and entrance, they were not art-deco.

"That, combined with the absence of a lift, meant that the building wasn't capable of accommodating the kind of facilities large scale music and comedy acts need and that's why we are replacing them.

"The new, fully accessible extension has been sympathetically designed in keeping with the existing fly tower and will include an increased number of dressing rooms, a green room, improved access to the fly tower grid as well as full high tech production and security facilities.

"I'm really pleased that we have been able to retain some of the doors so that they can either be used in the building or as part of a future exhibition.  In the meantime, the demolition of the block is yet another sign of the significant pace of progress."

The restoration of the Globe is being funded by Stockton-on-Tees Borough Council and a £4.5m National Lottery grant through the Heritage Lottery Fund's (HLF) Heritage Enterprise scheme.