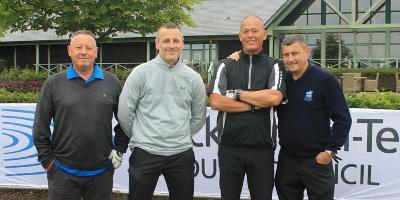 John Legg, of Nifco UK Limited, was part of the winning team alongside David Hutchinson, Chris Too Chung and Darren Bland from Nissan Sunderland.

The Mayor said: "I am delighted that we managed to match the amount of money raised last year. With all the proceeds going towards worthwhile charities it has become a popular, annual event.

"It is a great way to give something back to these charities and raise awareness of the work they carry out. I would like to thank the organisers and the teams who took part for making it such an enjoyable day. Well done to the team at Nifco for putting on such a brilliant performance!"

John Legg said: "Winning the Mayor's Charity day along with our main North East customer Nissan UK is an excellent achievement and always a fun day out, plus the lads from Nissan played fantastic. Working with and supporting charities is always something Nifco UK supports in our region. Thank you for a fabulous day as always."