'There are no excuses': Nearly £9,000 of fines issued after appeal to stop 'hammering' recycling sites goes unheeded

Abuse of 'bring sites' in Stockton-on-Tees has seen 22 people hit with fines of £400 and another three will be summonsed to appear at court. 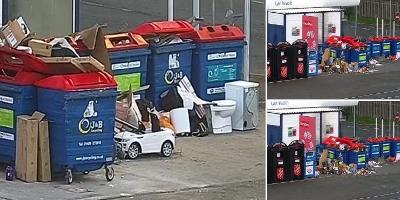 There are seven such sites in or near supermarket car parks across the Borough, each providing a range of recycling containers for people to use.

But the first weeks of lockdown saw the sites take "a bit of a hammering" with dumping of unsuitable items like toilets, beds, rubble, white goods and soil.

And that prompted Stockton-on-Tees Borough Council to appeal for people to stop abusing the sites or face action.

"We really wanted to avoid fining anybody but unfortunately there have been 41 further incidents since we issued that well-publicised warning in late April," said Councillor Steve Nelson, the Cabinet Member for Access, Communities and Community Safety.

"Many of the sites are covered by CCTV so if you dump stuff at them you run a very high risk you'll be caught and either fined or summonsed to court, depending on the severity of the offence.

"And there could well be more fines and summonses on the way as there are around a dozen further investigations still ongoing and we're still seeing instances of people dumping all kinds of things at the sites.

"The thing is, there really is no excuse for it.

"Not only have we retained weekly household waste and fortnightly recycling collections throughout the pandemic, the tip at Haverton Hill has been open for over a month now and bulky waste and green waste collections both restarted in late April.

"So in terms of waste collections and facilities, we've been pretty much back to what you'd consider 'normal' for some time now."

And Councillor Nelson warned there's also a risk that if the sites keep being abused, some may be scrapped altogether.

"We offer far more bring sites than nearby authorities but we can only do that with the goodwill and cooperation of the landowners where they're based," he said. "And we're hearing noises from some that if this abuse continues, they'll remove permission.

"In other words, we've reached an 'abuse it, you lose it' point, which is a crying shame especially for those people who use the sites responsibly. If you're not sure what you can leave at a site, read the signage or check the Recycle Now website first."