THE mysterious tale of the 'Stockton hippo' has caused quite a stir! 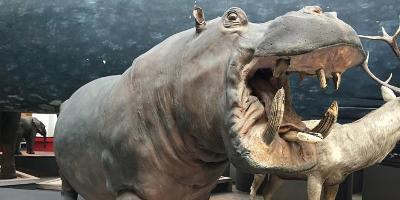 Two weeks ago, we brought you this story about Susan Symmonds' quest to find the site of the discovery of a hippopotamus tooth in 1958.

The find put Stockton-on-Tees on the map as the most northerly place on the planet in which the hippopotamus is known to have lived.

You may recall that Susan's pursuit was sparked when she heard a university professor make reference to this little known fact on a national radio podcast.

Naturally, we tracked down that professor - Danielle Schreve from Royal Holloway, University of London - to learn more about its significance.

Why is the find so special?

DS: The Stockton hippo is the most northerly record ever. There are no fossil records of hippo from similar latitudes in Scandinavia and further east, partly because those areas were subsequently over-run with extensive ice sheets in the last glaciation, thereby destroying the evidence, but also because hippos need mild winters with unfrozen water bodies such as lakes and rivers to survive.

The further east you go, the more continental the climate becomes and the harsher the winters. The next most northerly fossil record in Britain comes from Kirkdale Cave just outside Helmsley in North Yorkshire.

Any fossil preservation is special. People often think we find complete skeletons but this only happens under exceptional circumstances. Teeth are covered in enamel, the hardest substance in the body, and so they make great fossils. They can be preserved in a wide range of environments.

Why is so little known about it?

DS: Normally where we have sites with known fossils there's some concrete evidence about exactly where it came from, but some context is missing here. So the hope with this appeal is that someone, somewhere may remember it.

The tooth has been referred to in publications in the past but it's one of those things that has got into the literature without anybody subsequently spending the time to track it down and take it further.

It's a kind of one-off and it's been neglected. It was noted as a significant find but the specimen disappeared and it could be anywhere. Maybe it was returned to Stockton, or it could well be in the bowels of the Natural History Museum.

It's taken someone like Susan to look into this and do some great detective work. Hats off to her - she's shown incredible determination. I've got a real feel for how inspired she is and I've been happy to help her.

What made Stockton-on-Tees such a perfect place for hippos?

DS: The tooth was found 30 feet down in the ground, in sediment that apparently dates to before the last ice age, and not so far away in North Yorkshire there are cave sites full of hippo fossils. So it makes perfect sense really.

We're talking about 125,000 years ago, when the climate was a little bit warmer than we experience in Britain today. Temperatures were three or four degrees higher in summer, and winters were very mild.

That's not to say it was like Africa here because it wasn't like that at all. But it was perfectly normal for elephants, hippos and rhinos to live in Britain, and vegetation was like it is today.

The slightly warmer climate provided a window into a warmer world for these animals and it was enough to encourage hippos up from the Mediterranean and spread right across Britain at that time, whether it be in Stockton, the south west, or in Wales.

DS: It's possible there was just one find, but it's likely there are others. That's why I have said let's give it a go.

What if we can't take this any further?

DS: Even if we end up not being able to take this much further, the quest itself is important. If people read about this and think 'I didn't know that', or learn something about long-term climate change, then I think it's worth it.

Sometimes people think scientists are not accessible but in Susan's case she's got in touch with a range of people from universities and museums and we've been delighted to help.

I always think if people want to know about things they should try to pursue it and Susan has done just that! I think it's a great way of sharing knowledge too.