Take on the challenge at Stockton Duathlon

Fitness enthusiasts, race veterans and complete beginners are all being encouraged to take up their place at this year's Stockton Duathlon. 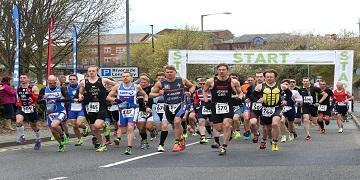 Set alongside the majestic setting of the River Tees, there are three separate races available to suit the abilities and aspirations of all participants on Sunday 23 April.

All following a simple run-ride-run format, entrants can choose from the following distances:

All races take place on fully closed roads that are flat, fast and spectator friendly. There are also cash prizes to be won for first (£500), second (£300) and third (£200) places in the Standard distance event for both males and females, plus medals and goodie bags for all participants.

Councillor Norma Wilburn, Stockton-on-Tees Borough Council's Cabinet Member for Arts, Leisure and Culture, said: "Now entering its fifth year and as popular as ever, the Duathlon on offer in Stockton is one of the biggest and best in the country.

"It's a fantastic opportunity for people of all fitness levels to set themselves a challenge and be part of a major sporting event right here in the Borough. The cycling element takes place on closed, traffic free roads while the running sections take in some great scenery so I would urge people to get their place secured.

"Whether you're lacing up your trainers to get involved or simply coming along as a spectator on the day, it's set to be a great day on the banks of the River Tees in Stockton."

The Duathlon is hosted by Stockton-on-Tees Borough Council in partnership with TriHard and is supported by British Triathlon.