Stockton Town FC will receive a fitting homecoming after their run to Wembley in the FA Vase competition. 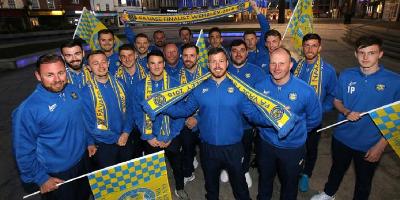 They will make a special guest appearance at Stockton Stages, where crowds are invited to come along and congratulate the team on what was a historic achievement for the club.

The Mayor of Stockton-on-Tees, Eileen Johnson, will say a few words before presenting the team with a special civic gift in the High Street Marquee at 12noon tomorrow (June 2).

The team, backed by more than 4,000 fans, suffered a narrow 1-0 defeat to Thatcham Town.

"Stockton Town FC's cup run was brilliant in bringing the Borough together," said the Mayor, who watched the team at Wembley.

"The final was so close. There was inevitably some disappointment but now the dust has settled the team can be incredibly proud of their achievement.

"It's only right that we celebrate their effort. I urge as many people as possible to come along and give them the homecoming they deserve."