Stockton Globe: Bringing the stars back to Stockton

A raft of hotly anticipated new music and comedy shows have been announced for Stockton Globe. 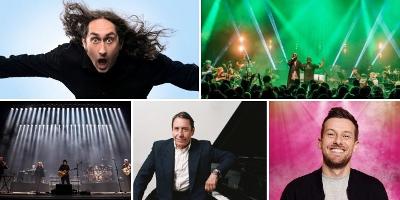 Stockton Globe, ATG's brand new flagship music and comedy arena, due to open its doors in 2021, has revealed its £28 million restoration and a raft of hotly anticipated new music and comedy shows due to go on general sale at 10am, Friday 23rd October.

The news was announced at a ground-breaking digital industry showcase, hosted by DJ and broadcaster Georgie Rogers and Stockton Globe's general manager Jo Ager, who presented from the historic venue's stage via green screen VR technology.

The thrilling line-up of world class acts is a statement of intent by the ATG venue, in its ambition to emulate a history that saw global stars such as The Beatles, The Rolling Stones, Stevie Wonder and Chuck Berry grace the Globe's stage in its previous life.

On 11th November 2021, Jools Holland will bring his Rhythm & Blues Orchestra feat. Ruby Turner, Louise Marshall and Gilson Lavis, to Stockton Globe, with special guest performances from Squeeze's Chris Difford and the one and only Lulu, who last performed on the iconic stage back in 1966 supporting Roy Orbison.

Sunday 14th November, 2021, will see Midge Ure take the stage, along with his Band Electronica, with a spectacular show that promises hits from Ultravox and Visage along with his solo work, plus a 'silent stage' and cinematic light show.

Steve Hackett brings his 2021 World Tour to Stockton Globe on 15th October 2021, with a show featuring the 1977 Genesis live album Seconds Out in full, with additional material, including Steve's solo concert favourite The Steppes to celebrate the 40th birthday of his fourth solo album Defector.

The ultimate live celebration of UK house and garage comes to Stockton on 13th November 2021. The House and Garage Orchestra is an expanded live band with horns and string sections, and many of the vocalists that originally recorded the genre's defining hits will join the tour and perform them live.

All of which are in great company as they join multi-platinum selling singer songwriter Paloma Faith's Infinite Things tour on the Globe's 2021 bill, whose show, taking place on Saturday 9th October 2021, sold out in under eight hours.

The first five comedy acts with shows on sale for 2021 have also been announced:

Adam Kay will bring his truly unique show This is Going to Hurt (Secret Diaries of a Junior Doctor) to Stockton Globe on 1st July 2021. Described as hilarious and heartbreaking by Charlie Brooker, award winning comedian Adam Kay will share entries from his very own real life diaries as a junior doctor in an evening of stand-up and music.

On Saturday 20th November, Stockton Globe will welcome Jon Richardson, one of the most individual, accomplished and downright funny stand-ups on the scene today, with his brand new show, The Knitwit.

And soon to be announced is Ross Noble, a comedian described as 'pure delight' by The Times, who will bring his Humournoid show to Stockton in 2021!

Strictly Presents: The Power of Dance, is a brand new show from the Strictly Come Dancing family, and  will hit the Stockton Globe stage on 24th June 2021 with both a matinée and an evening show, featuring the spectacular professional dancers Janette Manrara, Dianne Buswell, Amy Dowden and Neil Jones, with special guests to be announced.

Plus, already announced and on sale, Diversity will bring the 'Connected' tour created by the hugely talented Ashley Banjo, to Stockton on 2nd June, 2021. This show will take them into a new decade of Diversity, and centres around the world of social media, the internet, and the digital era we now live in, but more importantly how this connects us all.

The historic 3000+ capacity North East venue, currently being restored to its former Art Deco glory, has been revealed via a flythrough CGI video, that showcases exactly how the stunning venue will look, highlighting features including the flexible standing and seated configuration, new purpose built bars, VIP areas, dressing room suites, orchestra pits and of course the additional 200 capacity gig venue and cafe bar, The Link.

The venue has been designed with a modern audience in mind, with exceptional customer and artist experience, a £1.8million technical infrastructure and digital ticketing system.

Re-opening in 2021, after more than 45 years since the last live performance, the Stockton Globe will be a huge asset for the Borough's economy, attracting up to 200,000 visitors per year and bringing millions of pounds into the local economy each year. Its restoration is key to the development of Stockton High Street and will create the biggest live entertainment venue between Newcastle and Leeds, right at the heart of the Tees Valley.

The Stockton Globe is due to complete in April 2021 and will be run by the world's leading operator of live entertainment venues, Ambassador Theatre Group (ATG).

Councillor Jim Beall, Stockton-on-Tees Borough Council's Cabinet Member for Health, Leisure and Culture, says: "The calibre of these acts speak for themselves and I have no doubt that these shows going on sale following on from the Paloma Faith and Diversity announcements will be starting to get people from near and far very excited for the Globe's reopening next year.

"It's an eclectic mix of entertainment on offer and it demonstrates just how well-suited the venue is to a wide range of performances. The momentum is building quickly as more of next year's programme gets announced and I'd encourage everyone to get signed up to the mailing list so they can avoid disappointment!"

General Manager, Jo Ager says: "We're ecstatic to reveal the amazing names that we are bringing to Stockton Globe when we re-open next year. The people of Stockton know the history of the venue, but what we have planned for the future will make everyone, everywhere, sit up and take notice.

"This is the start of something really special; as we move forward, we will continue to focus on music, comedy and family-based performances and bringing the best in the business to our stage."