IT'S been used to mark everything from Remembrance Day to Stoptober - and now a full programme for Stockton-on-Tees' feature lighting has been agreed for 2019. 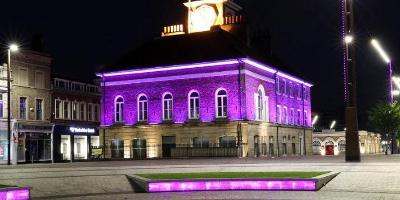 The Council's Cabinet has agreed a programme for the lighting around Stockton Town Hall, riverside and Newport Bridge for special occasions throughout the year.

In 2012, the Council installed coloured LED lighting on the Town Hall and the river's iconic bridges and riverbank between the Princess of Wales Bridge and the Millennium Bridge.

New lights were also installed on Newport Bridge in November 2017 in line with other lit-up landmarks like The London Eye and Gateshead's Millennium Bridge.

The permanent lighting features, which change colour and pattern, play an important role in the town's programme of popular riverside events and are also lit up to mark nationally recognised commemoration days, including those of a particular relevance and significance for the Council.

Councillor Norma Wilburn, Stockton-on-Tees Borough Council's Cabinet Member for Arts, Leisure and Culture, said: "The colourful lighting installations have been very popular and have allowed us to highlight the riverside and structures at their very best, while also showing our support for a wide range of nationally recognised causes. And photographs of our lighting have been shared far and wide.

"But more recently we have received more and more appeals to change the lighting which, unfortunately, we have found increasingly difficult to accommodate due to the sheer number of requests. It's a great problem to have in a way, but it's one we've decided we need to bring some order to otherwise the risk is that we actually diminish the impact of using the lighting.

"The new agreed programme for 2019 observes a select group of nationally recognised commemoration days, including those of a particular relevance and significance for the Borough. In addition, the Council will also consider changing the lighting in response to major events or incidents which have a profound impact on the general public."

The following programme was agreed by Cabinet Members yesterday (24 January) and will be reviewed every year.

Any lighting requests received in 2019 will be considered for inclusion in next year's programme.