Unsupported walls, rotting timbers, a badly-corroded underground drainage system and weaknesses in the roof structure were among the findings when Stockton's famous Globe was "stripped back to the bare bones" in the summer. 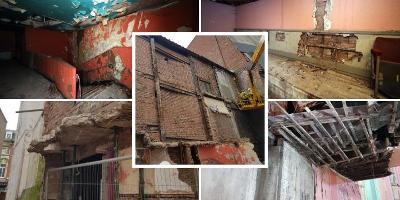 Since then contractors Willmott Dixon have pressed ahead with some aspects of its restoration, such as the knock-through at the rear of the Grade II-listed Art Deco building.

Meanwhile, architects and engineers have worked flat out to redesign the project to incorporate solutions to the problems identified but the complex nature of the structural works needed means the venue will open in Spring 2020 - a year later than planned.

The setback has not deterred the Globe's operators, The Ambassador Theatre Group (ATG), who have started the process of approaching acts to play the live music and comedy venue.

What are these 'structural problems'?

There are too many to list here, but alongside things like extensive water damage to plaster, timbers and steelwork, there have been discoveries like the unsupported wall to the side of the Globe on Middle Street.

It was only revealed in full when the adjoining dressing room block was demolished in the summer and it's safe to say it falls well short of modern building standards, with the brickwork not even being 'tied-in' to the supporting steel frame.

Then there's the drainage system underneath the Globe - inspections have found that it is not only blocked and damaged, but riddled with corrosion too. It's been necessary to design a new one.

The discovery of wet rot in the timbers behind a large area of historic plasterwork, including an Art Deco fountain feature, has made it impossible to salvage them and so they will have to be replaced.

But it's not all been bad news, with some aspects of the redesign presenting opportunities for improvements.

The new roof structure, for example, will sit above the existing roof, creating a protected roof void that can house plant and service ducts whereas the original plan was to house them in an external structure exposed to the elements.

More exciting is the solution to structural challenges in the adjoining 153 High Street. Initially a 'bolt-on' venue for the Globe, this will now be an independent venue in its own right, with those leading the redesign taking the opportunity to increase its size and give it a bigger function room, dining and kitchen facilities - all of which will make it a more attractive proposition that can thrive even when the Globe is closed.

Why weren't these problems identified before now?

As you can see in our video with the Globe's restoration consultant, Dr David Wilmore, unexpected discoveries - and the technical challenges they pose - are a common feature when restoring the buildings of yesteryear.

Dr Wilmore, said: "Restoring old buildings is far more complicated than building new ones because you just don't know what you're going to come up against.

"You can base your initial timescales on what you think you're going to come up against but ultimately, you can't get a full picture of the condition the building is in until you've stripped it right back.

"We reached that point in the summer and with the Globe, we not only found things we didn't expect, we found things that were much much worse than we expected. That's just the nature of restoring old buildings - they're full of unexpected surprises.

"Take the huge wall to the side of the stage - it was only when we demolished the adjoining dressing room block in the summer that we could see it for the first time.

"What we expected to find was a good, solid-built wall with supporting steel frame but what we found were bricks that are not actually tied-in to the steelwork. We can't leave it like that, and so we've had to redesign the project to take this into account.

"But on a more positive note we've got the unknowns out of the way, we've got design solutions for the problems we've identified, and everything we're doing now represents a step towards restoring this fantastic building back to its former glory."

Councillor Nigel Cooke, Stockton-on-Tees Borough Council's Cabinet Member for Regeneration and Housing, added: "The fact is, we know this is a once in generation project and we know how much it means to people - every tour of the building we've put on has been fully booked within days.

"That's why we've brought a much greater level of ambition to the project since becoming the lead delivery partner. Unlike the early plans for the building, this is now a full restoration - we think it deserves no less and had we not aimed high we would not have been able to attract ATG as operator and with that, the promise of big name acts performing at the venue. Nor would we have been able to bring forward the neighbouring 153 High Street as a venue in its own right.

"So, we're not messing about here. We won't be cutting any corners - we will be doing the job properly so that it is an asset for decades to come.

"We've not been sitting on our hands either. We've brought forward the aspects that we can crack on with while the redesign work has been going on in the background. Though it may not look like it from the outside, we've actually made a lot of progress on the inside, including asbestos removal, a 'soft strip', and completion of all major demolition works.

"What we can say for sure is that the restoration is happening at the fastest pace possible, and that we will be bringing this fantastic venue back into use - there is absolutely no doubt about that.

"Everything we're doing is about making sure we deliver a top-class facility that can host the biggest and best entertainment and really hit the ground running."

Are acts being booked now?

When the restoration is complete, the Globe will play host to live music and comedy and its 3,000 capacity will firmly position it as the largest venue between Newcastle and Leeds, pulling an estimated £18million into the local economy every year.

ATG, a global leader in live entertainment with theatres in New York's Broadway and London's West End, has signed-up to operate the Globe for 25 years and has also been advising on its design.

And the company's representatives have opened their extensive contacts book and started to approach acts to play the venue.

ATG's Business Strategy Director, Liz Smith, said: "This is a really exciting time for us as we start the process of engaging with representatives of big acts with major box office pull.

"We are absolutely intent on bringing some of the biggest names in showbusiness to Stockton-on-Tees and it is now that our producer and promoter relationships really start coming into play.

"The Globe's rich history and all of the nostalgia and public love that go with that make it a truly special project - one of the most exciting we've ever been involved in, in fact - and we just can't wait to get going.

"We're very confident we can make an immediate impact and quickly establish the Globe as a leading venue on the UK touring circuit."

Liz added: "In the not too distant future we'll be launching a mailing list for the venue and creating a presence for it on our website so watch this space as there'll be opportunities to sign-up and ensure you keep informed of what we've got lined-up."

What do the Heritage Lottery Fund think?

Ivor Crowther, Head of Heritage Lottery Fund, North East, said: "Like we said at the outset of this project, there is at least one historic building like the Globe in almost every town and city.

"And these empty buildings, though much-loved, present huge technical and financial challenges. Our Heritage Enterprise scheme is about using money raised through the National Lottery to unlock the potential of buildings like the Globe.

"That aspiration has not changed. The Globe's potential as a catalyst for wider regeneration, economic growth and job creation are clear to see, and of course its restoration will also save a wonderful part of our heritage from further neglect."