SIRF18 Coming to a town near you!

Spectacular walk about theatre shows are set to give Billingham, Thornaby, Norton and Yarm a taste of what's to come at Stockton International Riverside Festival. 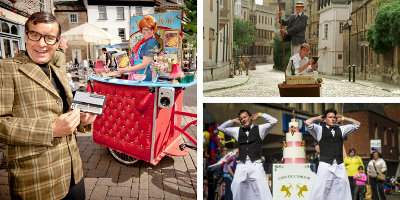 On Saturday, July 28, visitors will be treated to family-friendly live street entertainment in a bid to spread the word about the four-day festival.

Reckless Invention are a duo of comedy waiters who combine silent humour and graceful slapstick for a jam-packed street performance. Self-contained and versatile, they come with a wheeled trolley ready to roll on any terrain.

Appearing as Britain's got Talent Semi-Finalists in 2009, Afrikan Warriors are an acrobatic troupe who have performed over 2,000 shows around the world. From the street theatres of Tanzania, they incorporate traditional dance in their fast-paced routine.

The Fairly Famous Family will be returning to the Borough for another year with their walkabout, comedy sketches. The show incorporates a converted ice cream three wheeled trike, which pedals down the street before featuring in a static show.

Artizani's performance of Punt sees two Oxbridge undergraduates take to a 12ft long gondola. They will serenade and entertain the public with light-hearted comedy as the boat drifts around the grounds.

To see the full festival programme, visit the SIRF website at www.sirf.co.uk  .