Stockton-on-Tees Borough Council is hosting a range of events in support of Armed Forces Week which celebrates the work of military personnel at home and abroad. 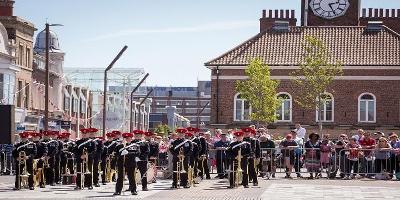 The week gets underway with a flag raising ceremony on Monday (24 June) starting at 10.15am outside Stockton Town Hall.

The Mayor of Stockton-on-Tees, Councillor Lynn Hall, will join members of the armed forces, and the British Legion, alongside serving and retired troops for the ceremony. Colonel Mitchell, an Honorary Deputy Lieutenant for County Durham, will preview the ceremony with a speech on the importance of the flag raising.

From 9.30am to 3.30pm, Stockton High Street will be bustling with activity including performances from the Salvation Army Band and talented singers paying tribute to classic wartime numbers.

Local schools are getting involved as well with pupils from Christ the King Primary, Crooksbarn Primary, Rosebrook Primary and St Cuthbert's Primary all performing.

The popular event features an inflatable paintball range, vintage military vehicles on display and information stands hosted by serving members and veterans of the army, navy and air force - offering people the chance to learn about the past, present and future of the armed services.

The Mayor said: "We honour our armed forces for the terrific job they do keeping us safe at home and abroad through their selfless hard work, dedication and sacrifice.

"It's really important to show support for our serving and retired military personnel, especially this year as we remember the 75th anniversary of the D-Day landings, so please come down and enjoy the activities on our High Street."

The traditional Mayor's Charity Duck Race takes place on Friday 5 July from 10am at Tees Barrage International White Water Centre to raise money for charities helping wounded soldiers from the three regiments that have Freedom of the Borough status.

Individuals can still take part by sponsoring a duck in the race at a cost of £1 and businesses can get involved in the corporate race for £100 per duck. To sponsor a duck, contact the Mayor's Office on 01642 528161 or email mayors.office@stockton.gov.uk

For more information visit Our council