The routes that Britain's best road racers will ride at the British Cycling National Road Championships in Stockton Borough between 23 and 26 June 2016 have been unveiled. 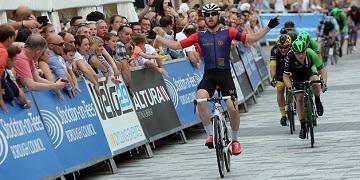 Both the time trial and road race courses have been designed to take in the best of Stockton and its surrounding villages - providing challenging courses to deliver compelling racing. Thursday's time trial starts on the High Street and makes a technically demanding loop through the centre before a long out-and-back loop to the south of the town centre, along the Queen Elizabeth Way before finishing back in the High Street. Sunday's road race heads a little further afield to the leafy villages of Thorpe Thewles, Redmarshall and Carlton for 12 testing laps for the men and 6 for the female competitors before returning for a fast finish around Teesdale and onto Stockton's historic High Street.

British Cycling's director of cycle sport and membership, Jonny Clay, has commented: "We are delighted to be able to announce the routes for this year's national road championships in Stockton. Lincoln's iconic course last year resulted in a great race for both the athletes and fans. We've worked closely with Stockton-on-Tees Borough Council to deliver a testing but fast course which incorporates a mix of punchy climbs and rolling roads. I think we can expect to see some exciting racing that the National Championships is now well known for."

The British Cycling National Road Championships take place during Stockton's annual Cycling Festival. The festival starts on Thursday 23 June with the British Cycling National Time Trial Championships which  was won in 2015 by Alex Dowsett who took the fourth British title of his career, and Hayley Simmonds, who beat strong competition from the likes of Dame Sarah Storey, Katie Archibald and Ciara Horne to claim the first British title of her career.

The excitement continues with an evening Youth Race on Stockton High Street (Friday 24 June), the annual Stockton Sportive (Saturday 25 June) before the festival comes to a climax on Sunday 26 June with stalls, stunts and demonstrations as well as the main race - the 2016 British Cycling National Road Race Championships with current road race world champion Lizzie Armitstead likely to be in the field and looking to defend her national championship title. 2016 could see Team Sky's Peter Kennaugh complete a hat-trick of victories following wins in 2014 and 2015 if he joins the elite men on Sunday 26 June.

Councillor Norma Wilburn, Stockton-on-Tees Borough Council's Cabinet Member for Arts, Leisure and Culture, said: "We are incredibly excited as we move closer to the prestigious championships arriving in Stockton Borough and seeing the official routes announced will set many sporting hearts racing I am sure.

"Stockton Borough residents have shown a great appetite for such events throughout our Cycling Festival and other sporting showpieces in previous years and I have no doubt that they will be out in force again, both along the route and at the finish, to show that Stockton is a superb destination for sports and events."

Alongside the announcement of the official routes, residents are once again being encouraged to apply for funding for projects that will animate the race routes and create great atmosphere on the big day.

Funding is available for any creative projects that enhance the race atmosphere. This could be a street party near to the race routes, decorations to add a party feel or live event music to give the competitors energy on their gruelling ride.

Applications close on Monday 29 February and the grant scheme is being run by Stockton-on-Tees Borough Council in partnership with the Tees Valley Community Foundation.