Recognition for the 15 Stockton-on-Tees companies with almost 2,000 years of business between them

Fifteen of Stockton-on-Tees' oldest businesses have been recognised for their contributions to the Borough. 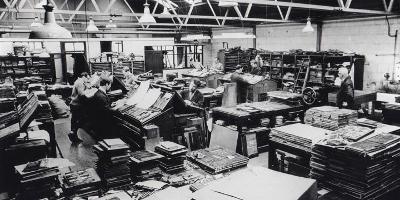 The companies, which have a combined age of 1,950 years, were commended for their efforts in employing local people and helping put the Borough on the map.

And they were presented with special awards by the outgoing Mayor of Stockton-on-Tees, Councillor Maurice Perry, at the Council's Annual Meeting yesterday.

The Mayor said: "It was a privilege to present these awards to such a fantastic group of businesses that have worked so hard for so long. I know there'll be a lot of the Borough's residents who have worked for one or more of the companies at some point in their lives and that goes to show how much of a widespread impact they have had on the Borough across the decades."

The oldest company to be recognised was Newbys Solicitors. The business, based on Stockton's Finkle Street, was established in 1725 by attorney Thomas Raisbeck, who later became the Mayor of Stockton-on-Tees.

Which other longstanding companies were recognised?

Photograph of the Billingham Press composing room circa 1962 is courtesy of Ivan Harrington.