One of Preston Park Museum's most significant pieces from its collection is to go on a National Gallery tour from October. 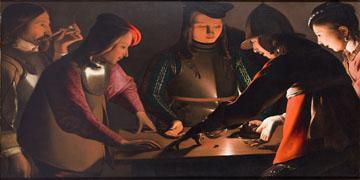 The treasured painting called 'Dice Players' by Georges de La Tour will be shown as part of the 'Beyond Caravaggio' exhibition, a collaboration between the National Gallery, London, the National Gallery of Ireland and the National Galleries of Scotland and will tour all three venues from October 2016 to September 2017. It will be the first major exhibition in the UK to explore the work of Caravaggio and his influence on the art of his contemporaries and followers.

The 'Dice Players' was painted by Georges de La Tour around 1650 and has been on display at the museum since 2012 as part of the Edwin Clephan Memorial Collection. It depicts a group of people standing around a table, which is lit by a single candle, watching a dice throwing game. De La Tour is known for hiding the source of light in his paintings, as can be seen in the 'Dice Players'. This extremely rare painting is one of fewer than 40 known by the artist, with the majority being on display within the Louvre's collection in Paris. The masterpiece is believed to be his last painting before he died in 1652.

Councillor Norma Wilburn, Stockton-on-Tees Borough Council's Cabinet Member for Arts, Leisure and Culture, said: "This is a fantastic opportunity for Preston Park Museum to showcase one of the most significant pieces from our collection in some of Great Britain and Ireland's most prestigious arts venues. It is an honour to be part of this National Gallery tour and to see the 'Dice Players' displayed alongside other great works of art by Caravaggio and those who he influenced.

"It also gives museum visitors a fantastic opportunity to see some of the other paintings which are rarely on display, including a Turner watercolour."

The last opportunity to see the 'Dice Players' at Preston Park before it goes on tour will be Sunday 25 September. In its place, at least three different paintings from the museum's collection will go on display throughout the year including a Turner and pieces from the Edwin Clephan Memorial Collection. The first to be shown will be 'Mustering of the Warrior Angels' by JMW Turner. This watercolour was painted by Turner in 1833 and is quite different to the style of work that usually associated with Turner.