Night time clean-up work under way on A66 stretch

A major clean-up is taking place along a stretch of the A66 to clear litter from the verges. 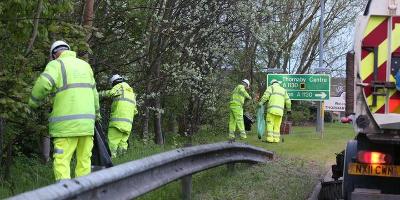 Stockton-on-Tees Borough Council has been given the go-ahead from Highways England to conduct the work from Teesside Park to Surtees Bridge.

The clean-up work is being carried out this week during three overnight closures of this stretch.

Councillor Mike Smith, Stockton-on-Tees Borough Council's Cabinet Member for Environment and Transport, said: "The A66 is a national speed limit road and we're only allowed access to carry out litter picking on the verges during times when it is closed for maintenance work.

"There have been some changes in how Highways England manages its network and our staff have recently undergone some additional safety training to ensure they can continue to access the roadside safely.

"It's unfortunate that we are forced to clear up after a minority of people who throw litter out of their vehicles onto our road verges, but we will take these opportunities to do clean-up work when they arise."

At the meeting of the Cabinet in April, councillors agreed to increase fixed penalty littering fines to £130.

Future government legislation will give Councils the power to impose these fines on the owners of vehicles from which litter is thrown, even if it was discarded by someone else.