Newport Bridge brought to life in a blaze of colour

Historic Newport Bridge is set to dominate the night sky above the Tees after last night's spectacular lights switch-on. 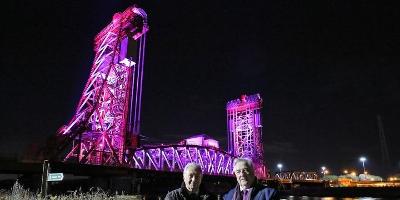 The new lights, introduced by Stockton-on-Tees Borough Council, will shine on the Grade II listed structure every night from sunset.

It brings Newport Bridge in line with the Infinity Bridge, Stockton riverside, and other lit-up landmarks like The London Eye and Gateshead's Millennium Bridge.

Council Leader, Councillor Bob Cook, said: "Newport Bridge is a spectacular structure with a proud and fascinating history, and it dominates the skyline above the River Tees.

"The new lighting shows the bridge at its very best and anyone passing it after sunset is in for a real treat."

Councillor Mike Smith, Cabinet Member for Environment and Transport, added: "The existing lighting installations along Stockton riverside and the Infinity Bridge have been very well received by local people.

"This new lighting is powered by around 150 energy efficient LED lamps which can be controlled individually or in groups to produce a huge range of colours or hues."

The lighting scheme was designed by Stainton Lighting Design Services and installed by Powercare - both are local firms.

Newport Bridge was opened in 1934 as a "lifting bridge" which lifts horizontally between two towers supported on wire ropes at each end of the span.

Teesside iron and steel works, Dorman Long, fabricated the steel for the bridge.

Originally 12 men were employed to man the bridge around the clock and during the 1940s and 50s and average of 800 vessels per year would pass beneath it.