The replacement of a bridge on one of Stockton Borough's busiest roads has taken a big step forward. 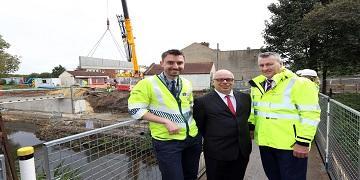 The scheme is being delivered by the Council in partnership with the Environment Agency and will reduce the flood risk to more than 150 homes in the area.

And it reached a major milestone this week when the beams for the new, single span bridge were lowered into place by crane.

The Council's Cabinet Member for Environment and Housing, Councillor Mike Smith, said: "The replacement of Londonderry Bridge is an essential part of the broader Lustrum Beck flood alleviation scheme to help reduce the flood risk to homes.

"The old bridge was a major contributor to serious flooding because its arches obstructed the beck's flow. Replacing it with a new, single span bridge will help reduce the risk of the kind of devastating flooding we've seen in recent years."

Councillor Nigel Cooke, Cabinet Member for Regeneration and Transport, added: "The replacement of the bridge is progressing well and the installation of the beams means the new bridge is really beginning to take shape.

"We'd like to thank local people for their patience while we deliver this essential project, which will complement the work the Environment Agency has been doing in nearby areas as part of the broader scheme."

The Environment Agency has built new flood walls along the beck at Bedford Street and Duddon Walk, which tie in with a raised embankment at Newtown.

This follows the completion of a new lifting screen at the culvert at Primrose Hill and the previously completed flood wall at Bishopton Road.

The Environment Agency's Ted Thomas, Project Manager, said: "The flood walls and embankment have been completed on schedule as this phase of the Lustrum Beck scheme nears completion.

"Once the bridge replacement is complete, we'll turn our attention to the next phase of work, which is to store extra flood water in the catchment upstream of Stockton and create new habitat, which is likely to begin in 2017."

It is expected that the new Londonderry Bridge will be ready to open in winter 2016/17.