New home for much loved dogs

A popular sculpture has been reinstated in Stockton Town Centre. 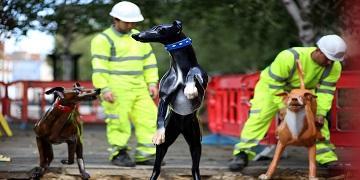 The three life sized greyhounds, 'Racing Ahead' by artist Irene Brown, were first unveiled in 1995 but were placed in careful storage three years ago when the regeneration of the town began.

Now the works are complete it is time for the cast-iron, painted dogs to be returned to a prominent position in Stockton Town Centre.

In January Stockton-on-Tees Borough Council held a public consultation to ask residents where they thought the 'Racing Ahead' greyhounds artwork should be installed.  A total of 75 suggestions for new locations across the Borough were received with the majority of residents saying they wanted to see the artwork back in Stockton Town Centre so that people can get to see them easily.

Anyone who visits the town from now on will find them in the paved area alongside Church Road next to Stockton Central Library and Municipal Buildings.

Stockton-on-Tees Borough Council's Cabinet Member for Arts, Leisure and Culture, Councillor Norma Wilburn, said: "When they were removed from the High Street the dogs showed plenty of signs of wear and needed some refurbishment. They have had some expert re-enamelling and now look as good as new.

"We considered all the locations put forward during the consultation to decide where best to position the greyhounds to retain the appearance and character of the work as the artist intended it, whilst also making it easy for people to see them and touch them.

"I'm really pleased the sculpture is back in Stockton Town Centre and its new home beside the children's library is perfect. The open space either side of Church Road is an attractive space with trees, benches and planters. It's used by people of all ages accessing the busy Stockton Central Library and Splash Leisure Centre."