New signs marking the ceremonial county boundaries within Stockton-on-Tees have been unveiled. 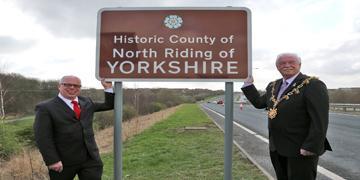 Stockton-on-Tees Borough Council's Place Select Committee began a review in July 2015 to gather information about boundary signage across the Borough, which was followed by a public consultation enabling people to contribute ideas about how best to mark the historic ceremonial county boundaries of the North Riding of Yorkshire and County Durham.

Four locations were identified for the installation of signs - at Yarm Bridge/High Street, Jubilee Bridge, Victoria Bridge and the Princess of Wales Bridge.

And the Mayor of Stockton-on-Tees, Councillor Ken Dixon, was joined by Councillor Nigel Cooke, Stockton-on-Tees Borough Council's Cabinet Member for Regeneration and Transport, to official unveil the first signs at the Jubilee Bridge.

The Mayor said: "We know that a great number of people feel a real connection to and strong pride in being from the North Riding of Yorkshire and from County Durham.

"In particular the history and heritage of these ceremonial counties contribute to a strong sense of identity for many, so it's very pleasing to be able to unveil these new signs."

Councillor Cooke added: "The Council's Place Select Committee has done some great work to reach this point and appropriately recognise the boundaries of these ceremonial counties.

"I'd like to thank everyone who contributed to this detailed and valuable work which involved extensive consultation with local residents and followed the publication of revised regulations by the Department for Transport, which completed a national review of road signage last year."

The signage at the other locations is due to be installed in the coming weeks.