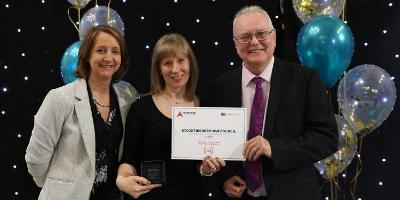 The Council recruited 40 new apprentices across a range of services last year, receiving more than 900 applications for the positions.

By the end of 2019 more than 100 Council employees were on an apprentice contract or undertaking an apprenticeship qualification to support their personal development.

This success has led to the Council being named runner up for Overall Employer of the Year at Northern Skills Group Apprenticeship Awards 2020 for the Tees Valley and North Yorkshire region.

Councillor Bob Cook, Leader of Stockton-on-Tees Borough Council, said: "I started out as an apprentice myself many years ago - it provided absolutely vital on the job experience and helped massively as I progressed through the world of work.

"We have a great track record of providing apprenticeships to people from all backgrounds with all levels of experience and to be runner up for this award is testament to the work we're doing.

"The apprentices we took on last year have done brilliantly so far. There was huge demand when we advertised the roles, with 599 different applicants!

"We'll be taking on more apprentices this year and expect similar demand. Details will be announced in the coming months."

As part of her apprenticeship, Donya has worked in a school kitchen and at the Council's civic kitchen, preparing food for events such as weddings and Mayoral functions.

In November she took part in a baking competition for local authority catering teams from the North East and Scotland, put on by the Local Association for Catering in Education.

She said: "I wasn't going to enter for the quiche award but my mentors pushed me to go for it. I really wasn't expecting to win at all so I was shocked! It was great to win.

"I've really enjoyed gaining new knowledge and meeting new people in my apprenticeship. It is making me more confident as I can be quite tough on myself - it is really nice to have people behind me.

Councillor Cook said: "A big well done to Donya, who really deserves this award nomination following all her hard work and dedication.

"I know staff in the kitchen have been very impressed over the last few months and she has been willing to take any opportunity offered to her.

"I haven't been lucky enough to try her signature quiche dish yet but I have heard some rave reviews!"

The Council plans to recruit another group of apprentices in May 2020, for employment to start in September 2020.

All of these apprentices will be paid at or above the national minimum wage, which is higher than the standard rate of pay for apprenticeships.