A service of dedication was held today (Wednesday 16 August) to honour the heroic actions of Sergeant Edward Cooper in the First World War. 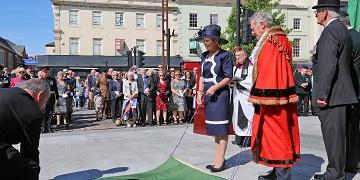 A memorial stone was unveiled at the Cenotaph next to Stockton Parish Church to commemorate the 100th anniversary of Sgt Cooper's bravery at the battle of Langemark, for which he was awarded the Victoria Cross by King George V.

Sgt Cooper, born in Stockton, and four other men from the 12th Battalion of the King's Royal Rifle Regiment, found themselves under machine gun fire on 16 August 1917.

Sgt Cooper rushed towards a concrete blockhouse housing the guns and fired his revolver into an opening. The guns ceased firing and the garrison surrendered, resulting in seven machine guns and 45 prisoners being captured.

The citation for Sgt Cooper's Victoria Cross award reads: "For most conspicuous bravery and initiative in attack. By this magnificent act of courage he undoubtedly saved what might have been a serious check to the whole advance, at the same time saving a great number of lives."

The Mayor of Stockton-on-Tees, Councillor Maurice Perry, said: "It was a real privilege to have been present for the service to dedicate a memorial stone to honour one of the Borough's most courageous men.

"It is only right that his memory is being commemorated in such a way befitting a war hero who sacrificed so much for his country.

"It was great to meet members of Sergeant Cooper's family and it was no surprise to see just how proud they are of him and everything that he achieved both in his military career and in his personal life."

After the war, Sgt Cooper returned to Stockton and married Iris. The couple had three sons, eight grandchildren and many great-grandchildren. He became manager at the Co-Op in Stockton, but the family lived in Thornaby until his retirement.

When the Second World War broke out in 1939, he was commissioned as a Major, taking command of the Home Guard Unit at Thornaby. In peacetime, Sgt Cooper served as president of the Thornaby British Legion and was instrumental in the repair and rededication of the town's war memorial. He was involved in the United Reformed Church, and served as a magistrate as well as president of Citizens Advice Bureau.

He missed only one Remembrance Day commemoration in 68 years until his death in 1985 at the age of 89, shortly after being made an Honorary Freeman of Stockton Borough.