Councillor Lynn Hall is the new Mayor of Stockton-on-Tees. 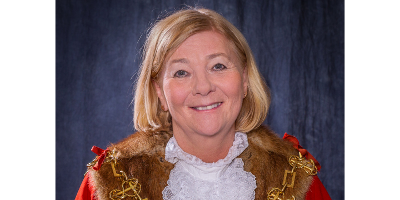 She was officially appointed at the Council's Annual General Meeting on Wednesday 22 May, replacing Councillor Eileen Johnson at the end of her mayoral year.

Councillor Hall was born in Stockton. She was a pupil at Oxbridge Lane Primary School and later attended Richard Hind Girls School. From a young age her interest in public service was influenced by her father Lawrence Wild OBE JP, who served as a councillor from 1959 to 1995 and was the Borough's Mayor for the Queen's Silver Jubilee year in 1977/78.

Councillor Hall is passionate about supporting young people. She was a teacher at Grangefield School and a governor at Ian Ramsey School for over 25 years, as well as treasurer at Fairfield Centre for Young People.

She has two children - a son who works as a marine engineer in Scotland, and a daughter who teaches at Tilery Primary School - as well as four grandchildren.

In her mayoral year Councillor Hall's official companion will be her sister, the Mayoress Janice Gallagher.

Councillor Hall said: "I'm looking forward to meeting people the most - that's what I really enjoy. We've got a beautiful borough and there's a lot to celebrate here, particularly our rich history, heritage and communities. I'd like to work together with local groups and organisations to make people proud and ensure residents live well in our region."

The Mayor's charities this year are The Great North Air Ambulance and NeoAngels, which supports families of sick and premature babies at the University Hospital of North Tees. She also hopes to support and promote the good work of other local charities.

This year's Deputy Mayor is Councillor Mohammed Javed who represents the Parkfield and Oxbridge ward. The Deputy Mayoress for the year will be his wife, Shabana Javed.

In her mayoral year the retiring Mayor, Councillor Eileen Johnson raised £27,956.50 for The Royal British Legion, Stockton Care Leavers Association, and The Mary Thompson Fund which supports the needs of asylum seekers and settled refugees in the Tees Valley.