Councillor Eileen Johnson is the new Mayor of Stockton-on-Tees. 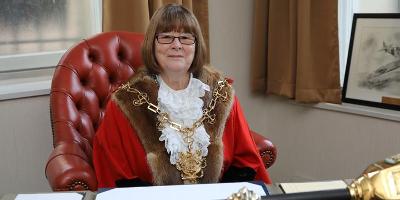 She was officially appointed at the Council's Annual General Meeting today, replacing Councillor Maurice Perry at the end of his mayoral year.

Councillor Johnson was born in Thornaby. Her grandfather was a blast furnace worker at the Bon Lea Foundry, which made a great impression on her. When she was four years old she moved to Redcar and later attended Cleveland Grammar School for Girls. She returned to live in Stockton-on-Tees in 1975.

Throughout her career, Councillor Johnson has worked for three Members of Parliament and was also a Housing Benefits Assessor for Stockton District Council from 1989 to 1995.

She has two children - a son and a daughter - as well as four grandchildren, three of which live in Thorpe Thewles. Her eldest grandchild is a music teacher and lives in Manchester. She is a keen supporter of Darlington Football Club.

In her mayoral year Councillor Johnson's consort will be former Mayor, Councillor Paul Kirton and when he is unavailable she has lots of willing volunteers to support her in her duties.

She said: "I am really looking forward to meeting different people from all walks of life - businesses, schools and local organisations and charities. I am also keen to attend as many of the big events held around the Borough as possible and promote Stockton-on-Tees as a place to visit."

This year's Deputy Mayor is Councillor Lynn Hall. Councillor Hall's consort for the year will be her sister Janice Gallagher.

The Mayor's charities this year are The Royal British Legion and The Mary Thompson Fund, which supportsthe needs of those who are seeking asylum or are settled refugees in the Tees Valley. She also hopes to support a couple of smaller charities.

The retiring Mayor, Councillor Maurice Perry, raised more than £19,516.60 for charities in his mayoral year with Meningitis Now, the Motor Neurone Disease Association and Cleveland Alzheimer's Residential Centre among the main beneficiaries. He also raised £1,389.21 for the Borough's three Armed Forces Freedom Regiments.

In March Councillor Perry braved a sky dive over County Durham to raise funds for The Moses Project and Rocsolid at Marsh House.

The Moses Project provides support for men who have become disengaged from society through circumstances such as unemployment or mental health issues. Marsh House provides accommodation and round-the-clock support for vulnerable women.