Hotel on track for successful first year in Stockton

Stockton's Hampton by Hilton hotel is approaching the end of its first full year of trading - and it's got off to a flying start. 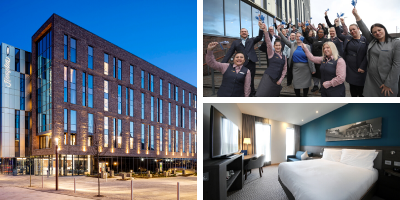 To date more than 34,000 room bookings have been taken with more than 48,000 guests staying and overwhelmingly positive reviews on travel websites.

The hotel, which opened its doors in February 2019, has enjoyed early success, and is particularly popular with business travellers.

But events around the region have also brought in plenty of visitors too, with the arrival of BBC Radio 1's Big Weekend in May leading to around 300 room bookings alone.

"Naturally, pre-opening costs were incurred in the 18/19 financial year - these were fully expected as part of the overall project costs and are fast on the way to being cleared.

"It's a hugely encouraging start and all signs point to the hotel being a highly valuable asset for the local economy, as we expected.

"The occupancy rate is around 75 per cent across the year, which is above what you'd expect for a new hotel too.

"And income generated by the hotel can be put back into vital services for people around the whole Borough.

"I'm looking forward to seeing the hotel go from strength to strength. It's popular with business travellers and it also benefits from the major events we host in the Borough and across the Tees Valley.

"And, of course, it'll also benefit from the reopening of the Globe theatre later this year, which will bring more and more people into the town."

John Lambourne-Richardson, General Manager of the hotel, added: "I've been delighted to see the hotel flourish in its first year of trading.

"We have enjoyed many successful events in the region and this has helped to heighten the profile of the hotel.

"The business community locally and further afield have provided a very consistent high volume of rooms and Interstate, the hotel's management company, are very pleased with its performance and are looking forward to supporting future growth.

"As the Tees Valley gets ready for some exciting investment opportunities, we look forward to being of service and working with new and existing business partners."

The Hampton by Hilton brand brings demand with it - the chain's Hilton Honors club has more than 60 million members, making it one of the biggest loyalty schemes in the world. Whenever they travel to a destination, club members are known to simply look for the nearest Hilton hotel.