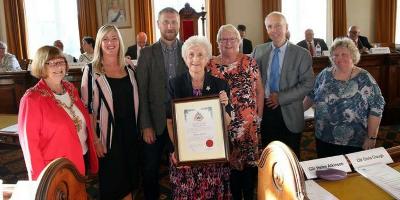 Peter Mallinson served as a councillor in the Hartburn ward for 22 years from 1976 until 1998, during which time he served on the Housing, Environment and Policy and Resource Committees.

He was also a head teacher at Hardwick Junior School, and taught overseas. He died in 1998.

The Honorary Alderman status was conferred at a ceremony attended by his widow, Elsie, and led by the Mayor of Stockton-on-Tees, Councillor Eileen Johnson.

The Mayor said: "Peter was an outstanding public servant and in making him a posthumous Honorary Alderman, we recognise his dedication to the community."

Mr Mallinson had a love for the countryside, and when he retired was a keen auctioneer and antique collector.

During retirement he became a supervisor for Nacro - a national social justice charity which covers education, housing, substance misuse treatment and the prevention of reoffending.

And he had a claim to fame - he won the Generation Game with his daughter!