A home dog boarding business owner who operated without a licence was sentenced at Teesside Magistrates' Court on Tuesday (1 December). 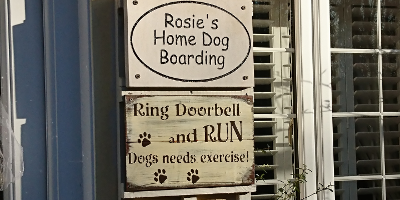 Rose Salmons, 65, of Harbottle Close in Ingleby Barwick and former business owner of Rosie's Home Dog Boarding, pleaded guilty to two offences of fraud contrary to The Fraud Act 2006 and one offence of allowing a licensable activity to be carried out when there was no licence in place contrary to the Animal Welfare Act 2006. She also pleaded guilty to two offences of engaging in an unfair commercial practice, contrary to the Consumer Protection from Unfair Trading Regulations 2008.

The court heard that Stockton-on-Tees Borough Council's Trading Standards and Licensing services began an investigation after a member of the public contacted them with concerns about the number of dogs at the property and to confirm whether the business was licensed.

Licensing officers visited the business in September 2019 where they heard dogs barking and witnessed a woman collecting a dog from the property, despite Mrs Salmons' licence expiring in December 2017.

Further investigation found home boarding appointments available online, the business listed on Yell.com and Facebook, and a business sign attached to the property's door, which indicated that the business was licensed with the Council.

In mitigation Mrs Salmons accepted that she should not have continued to look after customers' dogs. She has ceased trading and has now agreed to work with Licensing officers to remove the online business listings.

Councillor Steve Nelson, Stockton-on-Tees Borough Council's Cabinet Member for Access, Communities and Community Safety, said: "It's vitally important that businesses are licensed to operate legitimately to protect members of the public and, in this case, their much-loved pets too.

"Sadly Mrs Salmons continued to trade fraudulently and I hope the sentence handed to her will serve as a lesson to others who try to flout the law.

"We will always try to work with business owners to ensure they have the appropriate licence in place to run legally and safely. Anyone with concerns about a business should contact our Licensing Service on 01642 526558."