Going, going... Thornaby "eyesore" set to be pulled down 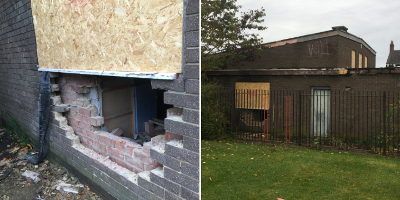 The People's Mission building has stood empty for years and local residents and ward councillors have raised concerns about its dilapidated condition.

Stockton-on-Tees Borough Council stepped in last year and has made a number of attempts to trace the building's owners.

But as these efforts have not been successful, the Council has moved to invoke legal powers enabling it to demolish the building itself.

Councillor Bob Cook, Leader of Stockton-on-Tees Borough Council, said: "Nobody wants to see an eyesore like that and I know nearby residents and local councillors will be glad to see the building pulled down.

"We tried very hard to trace the owners but without any luck. We understand it was owned by a group of trustees who have all since died and as nobody has come forward to express an interest in the building we've taken control of the situation.

"The powers we've used are available to us in cases where a building is having an adverse impact on an area and knocking the building down is undoubtedly a step forward.

"I appreciate this has been a key concern for the community and would like to thank everyone for their support and patience on the matter."

Stockton-on-Tees Borough Council has also invested £21,000 into refurbishing works at the nearby Victoria Community Hall.

This includes repairs to the roof, refurbishment of toilets including the disabled toilet and internal decoration throughout the building.

Councillor Cook continued: "The repair works carried out at Victoria Community Hall are very close to being completed and the hall will soon be ready to use again.

"The building can be used for a variety of events and is a great asset for Thornaby."

Both the People's Mission building and Victoria Community Hall are within the area covered by the North Thornaby Community Partnership.

The Partnership sees the Council, police, fire brigade, social landlords like Thirteen, and voluntary organisations work together to make the area a better place to live.