A sports programme for adults with disabilities and mental health conditions has scooped Stockton-on-Tees Borough Council a prestigious national award. 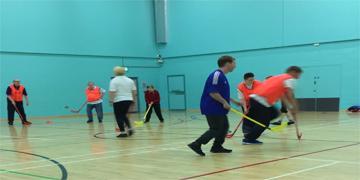 People who are referred to the scheme, which was launched in early 2015, can enjoy a choice of weekday activities including cycling, walking and football.

And it's getting impressive results, with those taking part reporting boosts to fitness, self-confidence and independence.

Councillor Norma Wilburn, Stockton-on-Tees Borough Council's Cabinet Member for Arts, Leisure and Culture, said: "This is a wonderful scheme supporting vulnerable adults to lead fulfilling lives and we're absolutely thrilled that it has been recognised in this way.

"The activities are held at locations across the Borough and from the feedback we've received it's clear they bring tremendous enjoyment to people. It is truly heart-warming to read about people's experiences of the service. I'd like to thank everybody involved for the great work they are doing."

Here are some of the comments received from people who take part in the Sporting-STEPs (SS) activities, and their families:

"Since joining SS, it has given my son a complete new aspect on life. He has more confidence and is a more outgoing person. Now every day he looks forward to going out."

"When I have the ball and I see the net, it seems miles away but I threw the ball and scored, and I thought 'Oh my God I have done it' and I am buzzing. The feeling stays with me for the rest of the day."

"My son really enjoys SS and he continues to make lots of friends which has greatly increased his independence, confidence and social interaction. All the staff and volunteers are lovely and deliver the activities in such a fun way so he has great fun whilst getting really fit. They also provide work experience which he has recently started which has helped with his self-esteem, independence and confidence."

"I really enjoy being part of the team at SS. I get a real feeling of achievement and I know that the whole team is behind me in a supportive way."