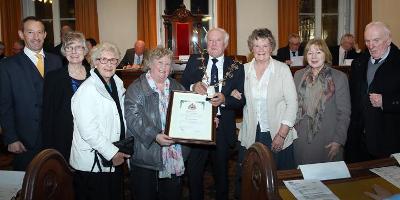 Stephen Smailes was first elected as a councillor in the Hartburn ward in 1967 for Teesside County Borough Council.

Over nearly four decades as a councillor, he served on Cleveland County Council, Stockton-on-Tees Borough Council, and the Association of North East Councils.

Mr Smailes was a keen sportsman and avid cricket fan, and did a lot of voluntary work helping to raise money for local community groups. He died in 2005.

The Honorary Alderman status was conferred at a ceremony attended by his widow, Marie, and led by the Mayor of Stockton-on-Tees, Councillor Maurice Perry.

The Mayor said: "Stephen's dedication to serving local residents was outstanding. Even after major surgery, his conversation with his hospital visitors was all about looking forward to getting back to working for his ward.

"During his recovery from that surgery, he received well over 120 cards from well-wishers, as well as a hotpot, apple pie and sponge cake! That was a measure of his popularity among the local community.

"In making Stephen a posthumous Honorary Alderman, we recognise his excellent service on behalf of this community. This is a fitting tribute to an exceptional character."

"I was so pleased with the reception," said Stephen's widow, Marie, who was joined by Stephen's friends. "It was nice to hear so many fond memories and stories about Stephen. He loved his town and he would have been very proud."