CLOSED: Problem house at centre of drug dealing, stabbing, and urinating in the street

A drugs den which left neighbours "sleep deprived" and "worried for their safety" amid screaming, drinking, urinating in the street and a stabbing has been shut down. 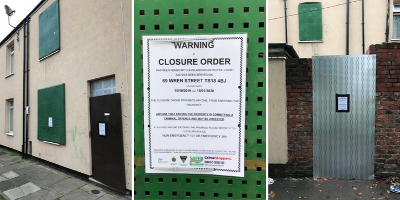 The order means the tenant at the centre of the anti-social behaviour - Ms Terry Beaumont, 58 - has been evicted and the property will be inaccessible to anyone for three months.

The house is now boarded up and if anyone tries to enter they will be prosecuted.

Teesside Magistrates' Court heard how a series of complaints about the property have been brought to the attention of police, local ward councillors and civic enforcement officers since June this year.

The complaints relate to drug dealing, a constant flow of visitors by car, bike and on foot at all hours - with one report of 200 separate visits in only three days - drinking, urinating in the street, screaming and arguments, the court was told.

A stabbing to the rear of the property, in Sheraton Street, was also reported in late August.

Councillor Steve Nelson, the Council's Cabinet Member for Access, Communities and Community Safety, said: "The activities of the tenant and her visitors has caused months of absolute misery and distress for the good people of this street and this just won't be tolerated.

"I'm pleased we've been able to work closely with Cleveland Police to take this decisive action and I'd also like to thank our Civic Enforcement Officers and in particular, the local ward councillors, who have worked with residents to put together the evidence necessary to secure this order."

Sergeant John Sproson of Cleveland Police added: "The residents have been subjected to months of anti-social behaviour from this address, and hopefully this action will improve their quality of life. This is a great example of the community working together and achieving great results."

Anyone with information regarding anti-social behaviour in their area should contact Cleveland Police on 101.