Can you help Susan solve the mystery of 'the Stockton Hippo'? 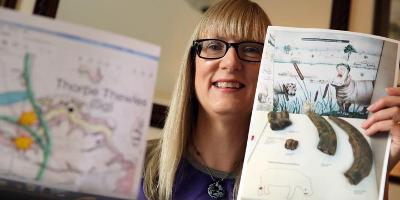 It sounds like a scene from Jumanji, but hippos really did once roam the 'streets' of Stockton-on-Tees!

Okay, so it might have been hundreds of thousands of years ago and well before any 'streets' came to pass, but it's true they once lived here.

Because Stockton-on-Tees is the most northerly place on the planet in which the hippopotamus is known to have lived.

In 1958, a fossilised tooth was found around 30 feet down in gravel four miles north-west of Stockton.

Nobody seems to know the exact location of the discovery, or who discovered it, or even why they were digging.

But records show that it was brought to the attention of the Borough's Librarian and Curator, G.F. Leighton, who promptly sent it to the Natural History Museum in London.

There, the find was identified as a molar tooth belonging to a Hippopotamus amphibius, which is the very same species of hippo that lives in Africa today.

And so Stockton-on-Tees was granted a new claim to fame - a claim that has since been forgotten...until now!

Susan Symmonds was heading down the M1 one grey February day last year listening to a podcast of the BBC Radio 4 show, the Infinite Monkey Cage when something piqued her interest.

"I was in the car listening to the show, which takes a light-hearted look at scientific matters of the day, and there was a professor on talking about animals that populated the earth before the last ice age," said Susan, who works in Stockton-on-Tees Borough Council's Revenues and Benefits Service.

"And then she said the world's most northerly occurrence of the hippopotamus is Stockton-on-Tees - I just heard the words 'Stockton-on-Tees' and my ears pricked up. I was like 'What? Run that past me again.' It was absolutely amazing.

"I thought 'we must know about this', and I had to look into it. But when I did, it seems it's been lost in the mists of time. Nobody really knows about it. So I had to find out more."

Susan, 53, made it her goal to find the tooth and visited the Natural History Museum in London, but was told their archives are so vast that it could take years to find it.

She also tried Preston Park Museum and the Dorman Museum, but again drew a blank.

"Nobody knows for sure where the tooth is, but in my opinion it's in a dusty box somewhere in the bowels of the Natural History Museum," she said. "They're constantly working through their archives but it could take 10 years to get to it."

So Susan turned to the expert from the podcast, Professor Danielle Schreve from Royal Holloway, University of London, and this is where things get exciting.

"Professor Schreve has been so helpful and has contacted lots of people to try to find the whereabouts of the tooth, without any luck," said Susan. "However she also said it would be very unusual for there to be just a tooth and no other remains, and that she and retired professor, Jim Rose, would be interested in doing another dig!

"Of course the problem we have is that we don't even know the precise location where the tooth was found, which is incredibly frustrating because there's every possibility there are more bones there. And even if we do get the location, there might be land access or ownership issues.

"But I can't let it go. I can't just say 'oh, that's interesting' and walk away from it. It's piqued my interest so much. I'm passionate about Stockton. I've lived here for nearly 50 years and worked here for more than 30 years. I'm not giving up, no way!

"The Stockton Hippo has so much potential and it's my dream to see it recognised. We could have it all over - on signs, in schools, with kids learning all about it and even choosing a name for the hippo.

"I've got a geology A-Level but I've never done anything like this before! It's such a fun and interesting story and it could even generate money for the area. How could I not pursue it?"

Can you help Susan find the hippo?

To have any chance of finding the rest of the Stockton Hippo and its family, Susan needs to establish exactly where the tooth was found.

G.F Leighton's letter to the Natural History Museum describes the location as "...a quarry some four miles north-west of Stockton".

Four miles north-west of Stockton is the village of Thorpe Thewles, and according to historical maps Susan has obtained, there were three gravel pits around it.

Do you know who found the hippo tooth? Or where they found it? If so, please contact Susan on stocktonhippo@hotmail.com