A special plaque to remember the Stockton-on-Tees residents who united to fight fascism in the 1930s has been unveiled. 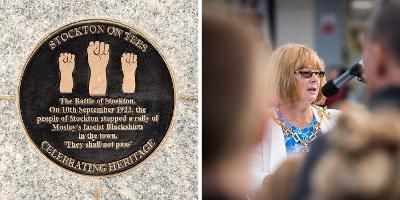 The Mayor of Stockton-on-Tees, Councillor Eileen Johnson, officially unveiled the plaque near the town's Market Cross to mark the little known Battle of Stockton which took place on 10 September 1933.

Across Europe, new political movements grew out of the hardship and high unemployment of the early 1930s. In this country there was emerging support for the British Union of Fascists, championed by their leader Oswald Mosely.

The plaque commemorates the Battle of Stockton which saw thousands of people stand up to Mosely and his 'Blackshirts' who had planned a rally in the town.

The Mayor said: "The story of the Battle of Stockton has not been widely told but should not be forgotten. As first citizen of the Borough I would like to thank our residents in those inter-war years for their conviction, rising up to resist the emergence of fascism.

"We should be proud that Stockton-on-Tees was one of the first communities to react to Mosely's crusade. This plaque marks the place and the moment in history for future generations."