It's been to London, Manchester and Birmingham, and now The Danger Tree art exhibition is coming to Stockton High Street. 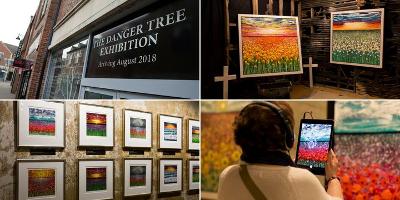 Here's everything you need to know.

What is The Danger Tree?

The exhibition, which marks the centenary of the end of World War One, tells an immersive story of the soldiers who fought and fell.

Colourful oil paintings depicting fields of flowers evoke scenes of poppies that have become symbolic of the war. The skies and flower forms hint at something less literal and more ominous.

The pictures trigger an augmented reality, where narrative tells harrowing tales of the fallen, while reminding us of the impact on loved ones.

When and where can you see The Danger Tree?

The exhibition will be installed in unit 24, Wellington Square (near Debenhams), and will launch at SIRF18 on Thursday, August 2, running until Saturday, September 29.

What makes this exhibition stand out from the rest?

The Danger Tree has toured the country, capturing the imagination with an augmented reality experience.

Through digital app Blippar, visitors can use a smartphone or tablet to scan the artwork and bring to life fascinating animation, music, and wartime poetry narrated by acclaimed actors including Vicky McClure and Sean Bean.

Who is behind The Danger Tree?

"The paintings will be displayed in a bespoke set made to look like a shelled art gallery, which is being created for Stockton by award-winning film set designer, Kave Quinn. The overall effect will be visually striking."

What will The Danger Tree bring to the Borough?

"The emotional exhibition has captured the hearts of people around the country, and we are delighted to be able to showcase it in our Borough," said Councillor Norma Wilburn, Stockton-on-Tees Borough Council's Cabinet Member for Arts, Leisure and Culture.

"It is a real coup to bring it here and it's brilliant to see such an amazing exhibition make use of a central retail unit because it will attract passing shoppers and also bring people into the town centre.

"It is an incredibly moving exhibition, which commemorates the sacrifice soldiers gave during World War One, and the loss that loved ones suffered."

Entry is free, and headphones and iPads will be provided.