Shop and flat closed after more than £150,000 worth of dodgy cigarettes, vapes and baccy seized in trading standards raid

A Norton store and neighbouring flat have been shut down after a Trading Standards raid resulted in the seizure of more than 200,000 dodgy cigarettes, with some stashed in purpose-built hides. 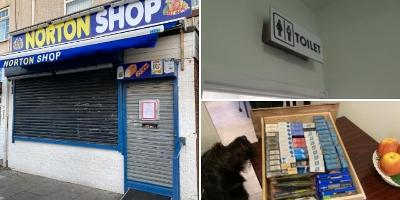 The court heard that Council officers joined by police and a sniffer dog executed a search warrant at the shop and flat in November following a string of complaints about illicit tobacco sales, including reports of sales to children.

They found two packets of counterfeit cigarettes behind the shop counter and dozens more stowed away in a wooden hide behind a "TOILET" sign above a door in the shop's back room.

But it was a search of the flat above a neighbouring shop and its back yard that unearthed a far more substantial haul, with boxes of illicit tobacco piled floor to ceiling in a custom-made roof compartment as well as stashes in wardrobes in the hallway, drawers and cupboards in the kitchen, and boxes in the bedroom.

All in all, officers seized 212,020 counterfeit cigarettes and 832 pouches of suspected counterfeit tobacco, along with 439 non-compliant e-cigarettes with a total value of around £150,000. A related criminal investigation is ongoing.

Councillor Steve Nelson, the Council's Cabinet Member for Access, Communities and Community Safety, said: "We have received complaint after complaint about this shop and worryingly a number of these complaints have been about the regular sale of single or packets of cigarettes - and vapes - to children.

"Those involved in this illicit trade obviously have no conscience - they're only interested in making money and don't care about the harm they're causing to our communities or that such activities encourage children to take up smoking. As this case shows, they're also resorting to increasingly sophisticated methods to try to evade detection.

"We secured an interim closure notice before Christmas and I'd like to thank our Trading Standards officers for their tenacious work in securing this three-month closure order, which is the maximum the magistrates can impose. I'd also urge local people to report any sales of illicit tobacco to us so we can take the necessary action."

Anyone with information on the supply of illicit tobacco from any business or residential premises in the Borough is urged to contact Trading Standards on 01642 526560 or email trading.standards@stockton.gov.uk.