All you need to know ahead of Stockton Fireworks 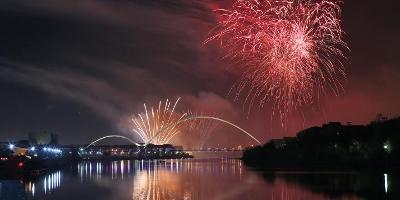 Along with a jam-packed evening of stage entertainment hosted by BBC Tees Radio Roadshow, thousands of visitors are expected to flock to the free, family-friendly event.

What is the theme?

This year's theme of 'War and Peace' will mark the centenary of the end of World War One. There will be a colourful tribute to represent the impact of war and a celebration of peace.

What is the BBC Tees Radio Roadshow?

BBC Tees Breakfast presenters Amy Oakden and Neil Green will host an evening of entertainment in the run up to the firework display.

Former X Factor contestant Sam Lavery will headline the show, joined by singer/songwriter Oli Patto and the Rock Choir, who are made up of over 60 singers from across the North East.

What other entertainment is on offer?

Councillor Norma Wilburn, Stockton-on-Tees Borough Council's Cabinet Member for Arts, Leisure and Culture, said: "Held exactly a week before the centenary of the end of World War One, this year's theme of 'War and Peace' will be a fitting tribute to those who fought in both World Wars as well as present conflicts.

"It will complement a number of other events the Council is doing to mark the centenary, such as the hugely popular Danger Tree as well as the upcoming Point me to the Skies and Remembrance Sunday services.

"Our fireworks display attracts thousands of visitors each year, so I would encourage people of all ages to wrap up warm and enjoy this spectacle with the backdrop of our stunning Riverside."

Why isn't it happening on November 5?

After the huge success of last year's display on the Sunday, the date for this year was put to a public vote which went in favour of holding the event on Sunday, November 4. The time has also been brought forward to make it easier for families and those with young children to attend.