Stockton-on-Tees residents are being urged to "act now" in an attempt to avoid coronavirus restrictions seen in other parts of the North East. 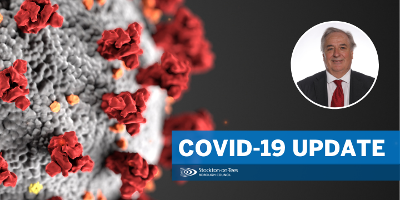 The dashboard shows 53 cases were confirmed in Stockton-on-Tees in the week ending September 13, a rate of 26.9 cases per 100,000 population.

Councillor Bob Cook, Leader of Stockton-on-Tees Borough Council said: "We've all seen the news about the restrictions being put in place in the north of the region.

"Although our case numbers aren't as high we are tracking our position closely each day. The national problems with the testing system mean we may yet see another increase coming through as the figures are updated in the coming days.

"We need everybody to act now and follow the rules to ensure stricter restrictions aren't needed here."

Councillor Cook, who is also Chair of the Borough's Local Outbreak Engagement Group (LOEG), continued: "Now is the time to follow the rules stringently as that's the only way we can flatten the spike of cases in the Borough.

"Remember to stick to the 'rule of six' and don't socialise with any more than six people indoors or outdoors. Keep two metres or more from anyone not in your household.

"And remember - social distancing is just as critical when you're on a break at work, travelling to and from work and if you're out socialising."