The unsung heroes of Stockton-on-Tees have been thanked by the Borough's Mayor for the positive difference they make to local communities. 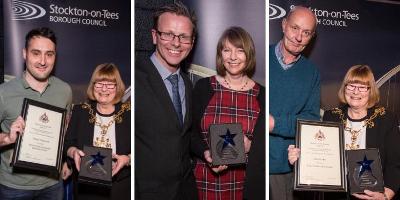 Now in their eighth year, the Mayor's Civic Awards highlight individuals and groups who set an inspiring example to others through their effort and determination.

The Mayor, Councillor Eileen Johnson, presented the winners with their awards at a full council meeting on Tuesday.

She said: "It was so special to meet all of these amazing people who do so much to help and support our communities in all manner of ways.

"There's such a strong community spirit in Stockton-on-Tees, which is a wonderful thing, so I'm honoured to present them with these awards as a thank you for all they do."

15-year old Nieve set up her own charity, appealing via social media and through leaflet drops for Christmas presents to put a smile on people's faces. She individually wrapped and delivered more than 400 presents to children's special care units, women's refuges and local hospices. Nieve organised all this while studying for her Year 11 mock exams.

Megan fundraises for 'Alan's Angels', a charity she founded in 2015 following her father's diagnosis of Dementia at the young age of 50. She has raised over £10,000 with the proceeds helping Alzheimer's Society and St Mark's Nursing Dementia Care Home, where Megan's father receives exceptional care.

Lyn has been a Poppy Appeal volunteer for 25 years. During this time she has helped raise over £800,000 for the Royal British Legion, an incredible achievement. For the second year running she has organised an appeal that has raised over £100,000 and this year is on target to raise an incredible £130,000.

Andy is well-known on the local football scene as the driving force behind all-conquering Hardwick Social FC. He took on the manager's job after the death of his dad Alex, doing everything from picking the team to washing the kits and overseeing a glittering period which saw the club lift the national FA Sunday Cup last year.

Pete has spent his life challenging injustice and championing the interests of those less able to speak out for themselves. He has been involved with a wide range of organisations across the Tees Valley which provide support and advocacy for asylum seekers including Justice First and the Tees Valley of Sanctuary. In 2001 he helped set up the Mary Thompson Fund, a hardship fund for refugees.

Dads' Music - Service to the Community: Groups and Organisations Awards

Run by volunteers,Dads' Music has been meeting for 45 years. The group listen to specially created 'mixtapes' as part of nostalgia inspired quizzes and singalongs using popular music from the 1940s, 1950s and 1960s. Their fortnightly group has proven so popular they have started sessions in Billingham too. The group of friends enjoy each other's company which helps to combat social isolation.

DRAKE The Bookshop - Service to the Community: Business Award

Richard and Mel Drake work tirelessly to share a love of reading. They run schemes where customers are invited to buy books for the Borough's looked after children or for libraries at local schools. They crowdfunded to give every Tees Valley school a copy of 'The Day War Came' and they host book clubs accessible for all.

Michael Poole is Chair of the Trustees of the Hospital of God which has almshouses in Norton, Hartburn and central Stockton and offers grants to local voluntary organisations working with disadvantaged groups. He is also a trustee of Five Lamps in Thornaby and is a practising magistrate. He is also a trustee of the Teesside Family Foundation, a local charity which supports local families and groups.

A performer since he was a child, Eric has been entertaining people for decades. With the support of his wife Barbara he runs 'At The Hop' gatherings - free social events for older and retired people to enjoy dancing and live music. Many friendships, and even some romances, have been made. The 'Hoppers' raise funds for local charities and Eric and Barbara also organise regular coach trips.

This dedicated bunch of people have collected more than 2,000 bags of litter from the local area.  With a 575-strong membership the group give up their time each Wednesday, and on the last Saturday of the month to litter pick. They also work hard to prevent litter being dropped in the first place by raising awareness with local schools, businesses and shoppers.

James and his wife Julie have fostered many children on both long and short-term placements. Last year Julie sadly died after a long period of ill health, leaving James to look after the two siblings in their care. Throughout Julie's illness the couple continued to provide stability and love, ensuring every aspect of the children's lives stayed on track.

David came to fostering later on in life when his step-grandson was born with complex medical needs, which are life-limiting and require special care and attention. The baby's progress during only a year with David has exceeded the expectations of professionals.  They put this down to the one-to-one attention David gives, his devotion to the boy and his absolute love.