It won't quite be how anyone imagined it would be, but there are still lots of ways you can mark the 75th anniversary of VE Day at home this Friday (May 8). 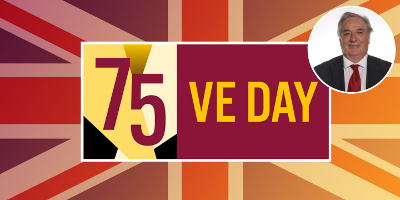 In line with expert medical advice, VE Day 75 events have been scaled back across the country.

"We can pay tribute to the service and sacrifice of the entire Second World War generation, we just need to do it from our own homes and our doorsteps.

"These are difficult times, and I know people in our Borough will want to join us in remembering those who gave so much."

Here are seven ways you can get involved from home.

Join the two minute silence at 11am

The Royal British Legion is calling on people across the UK to take part in a two minute silence from home at 11am in a poignant moment of remembrance.

"There is no right or wrong way to take part in the silence," says the Royal British Legion's Assistant Director of Commemorative Events, Bob Gamble OBE.

"Some people may wish to stand at their windows or step outside their front door, but we hope they'll embrace the opportunity to share in a quiet moment of reflection."

Have a VE Day party at home

A great idea and if you need some pointers on how to go about it then look no further than the marvellous guide on the national VE Day 75 website.

There are window posters, VE Day-inspired menus and recipes featuring spam hash and muscovado flapjacks, and even a VE Day party playlist!

And there's more on the English Heritage website too.

Make some noise at 3pm

On May 8, 1945 at 3pm, victory was declared in Europe and at 3pm on Friday, armed forces charity SSAFA is encouraging people to make some noise.

"We want to see red, white and blue in every street. We want people singing and musicians to get outside and play tunes, while maintaining social distancing of course.

"It's a traditional British knees up with a twist - you stay at home!"

Did you know that VE Day wasn't the end of the Second World War?

Well, it's the first of a '9 things you should know about VE Day' feature on the English Heritage website.

And if you're looking for some learning for the kids, the Royal British Legion has a VE Day learning pack for seven to 14-year-olds.

Historian Dan Snow is also doing a VE Day challenge to people to bring VE Day to life with things like newspaper articles, poems and videos.

BBC One will honour and celebrate the Second World War generation with an evening of memories and music from 8pm.

At 9pm, Her Majesty the Queen will address the nation followed by a national singalong of Dame Vera Lynn's 'We'll Meet Again'.

"We invite people to open their windows and doors wide and join us as we sing along to this wartime classic," says the Royal British Legion's Bob Gamble OBE.

"It has added poignancy in the current circumstances."

"It'll feature some really striking remembrance themed memories new and old and we'll be posting it to our Facebook and Twitter feeds. It's definitely one to look out for."

Send your VE Day experiences to our 'Dear Diary' project

You may have seen that we've just launched a 'Dear Diary' living history project to capture and document people's experiences during the Coronavirus pandemic.

How people chose to mark VE Day during this challenging time will be something future generations will no doubt look back on with interest and we'd love to see your photographs and hear your stories.

You can find out all about the project, and how to submit your photographs, stories and experiences, on the Heritage Stockton website.